On the Cubs, World Series, and moving from... Tinkers to Evers to Chance - to - Russell to Baez to Rizzo.

Today the Cubs play the first game of the World Series. I'll spare the reader the usual tales of woe endemic to lifelong Cubs fan. You can find that elsewhere on this blog.  Today we celebrate.

Regardless of how this series turns out, regardless of whether the Cubs win the World Series in four games or five, today we enjoy the moment. I can finally say I saw the Cubs win the pennant and play in a World Series in my lifetime. This is an emotional moment for all loyal Cub fans we react in different ways.  We all cheer. Bill Murray cried. I have been moved to verse. I'll get to that in a moment, but first, for context, a look back.

We've all heard, ad nauseum, about  the 108 years of frustration and futility since the last Cubs championship in 1908. That Chicago Cub team and the infamous 1908 pennant run against the New York Giants are legendary in baseball lore. It rated a full chapter in Jim Rasenberger's book "America 1908", right alongside Henry Ford rolling out the first Model T, Robert Peary's race to the pole, and the Wright brothers' historic flight at Kitty Hawk.

The 1908 Cubs were a championship team playing in a series that inspired some of the most colorful names and notorious events in the history of the game. Among the players - Christy "Big Six" Mathewson, Mordecai "Three Finger" Brown, Fred "Bonehead" Merkle, and of course the legendary Cubs infield of Tinker,  Evers and Chance.

Hat tip to Cub fan and blogger Aslam, who found the photo, and has the story:

"Joe Tinker, Johnny Evers, and Frank Chance were the Cubs’ shortstop, second baseman, and first basemen respectively. Along with Harry Steinfeldt, they were one of the best infield sets to ever step on the diamond. All four were great hitters, but they have been remembered in history for their defensive prowess. This infield combination was immortalized in a poem by Franklin Pierce Adams, a Giants fan (the Cubs’ biggest rivals at the time). The poem is entitled...

Unfortunately, this ode to the double-play left out Steinfeldt, who by the numbers has as much of a right to the Hall of Fame as Tinker or Evers. Baseball-statistics.com lists the 1908 Cubs infield as the second best in league history..."


After watching the Cubs win the pennant against the Dodgers with sparkling double play after sparking double play - including the gem that finished the game and series  - Russell to Baez to Rizzo in this 9th inning double play ....


... I decided it's time to update the most famous baseball stanza ever. 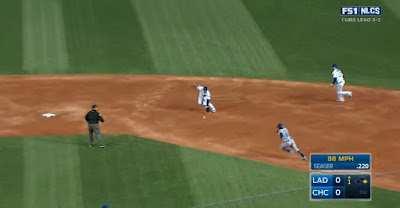 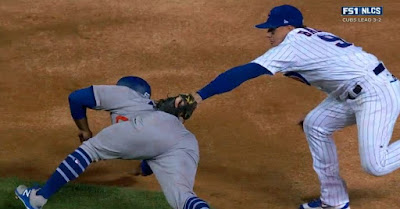 With apologies to Franklin Pierce Adams, my new improved 2016 version:

These are the happiest of possible words:
"Russell to Baez to Rizzo."
Unless it's the trio that often is heard,
Baez to Zobrist to Rizzo.
Ruthlessly defending day after day,
Fielding and throwing insane double plays ...
Oh wait!! Sometimes THIS trio makes them all pay:
"Russell to Baez to Bryant."

Bottom of the 7th. Cubs leading 2-1 against the Dodgers. Grimm in relief with bases loaded and nobody out. Pederson flies out. Toles to the plate - then this:

These are the happiest of possible words:
"Russell to Baez to Rizzo."
Unless it's the trio that often is heard,
Baez to Zobrist to Rizzo.
Ruthlessly defending day after day,
Fielding and throwing insane double plays ...
Oh wait!! Sometimes THIS trio makes them all pay:
"Baez to Russell to Rizzo."