It's a short trip for Wendy, Brian and Jim, as they will be driving back tonight.  Two events of note today. 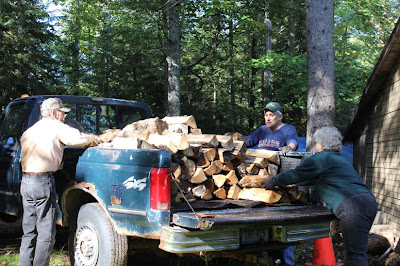 First,  were almost out of firewood, but after a Saturday call to the Barnett's we had two cords delivered on Sunday. 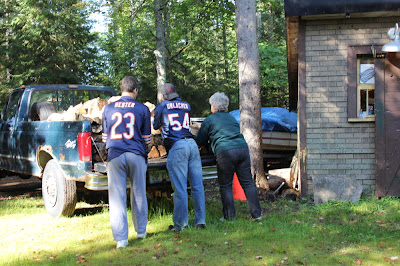 With Mrs. Barnett showing the newbies how to stack wood... 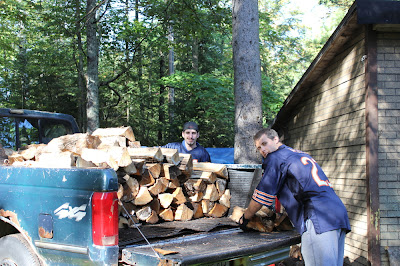 ... we were soon set for the fall/winter season. 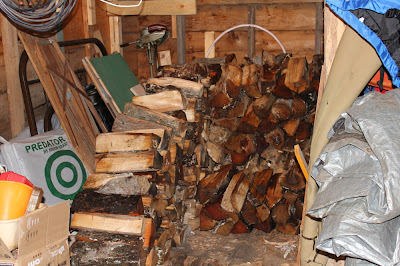 More important. This was the opening day of the Chicago Bear season.  Miraculously, the Bears and Packers were carried by the local cable outlet, so the Den was reconfigured into a Media Room/ Man Cave. 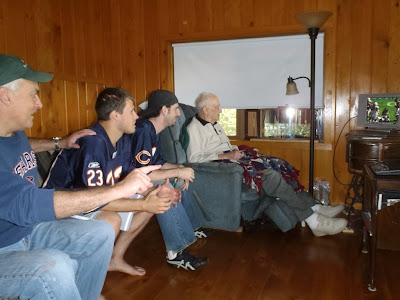 A pirated Red Zone feed and direct line to Papa's Caribbean bookie supplemented the game day experience [Note to Comcast and NFL: We didn't really stream a pirate Red Zone broadcast. That would be wrong. In any case it was Jimmy that did it.]
. 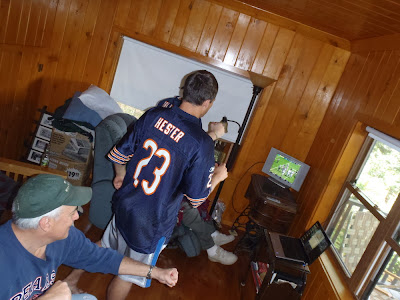 Bears win. Packers lose.  Pretty much a perfect day. We toast to the Bears in first place and the Packers in last. 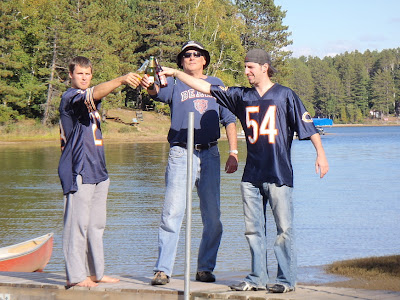 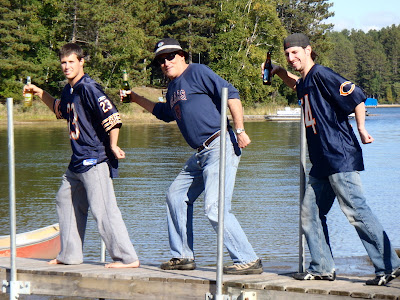 This was directed at our neighbors across the bay, who have the bad taste to display kayaks in Packer colors on their boat house.  But as for the Packer's themselves, I think this guy summed it up pretty well after Packer team captain Jarrett Bush made the ridiculous post game claim that they beat themselves:

"This isn't the first time that a player has used the "We beat ourselves" line. Following the playoff loss to the Giants, Clay Matthews had reportedly made a similar comment. According to Matthews: "The fact is, (the Giants) didn't beat us; we beat ourselves." The Packers need a reality check: the 19-game winning streak is long gone. The Packers have lost three of their past five games. They've been dominated in their last two games at Lambeau Field. Unbeatable teams don't get bullied by the Kansas City Chiefs with a backup quarterback. What baffles me is that these comments are coming from defensive players. In 2011, the defense surrendered more passing yardage than any team in NFL history. During the first half of their Christmas night game against the Chicago Bears, they made Kahlil Bell look like Matt Forte. Josh McCown even had a strong start to that game."

Heh. The simple fact is that SF quarterback Alex Smith is really not that good. The Packer's defense is really that bad. The Packers are on a two game losing streak and with Cutler under center for Thursday's game against  the Bears, an 0-2 start is staring them in the face.  I am taking Bears straight up on Thursday and beginning to wonder whether the Pack will win any games this year at all. 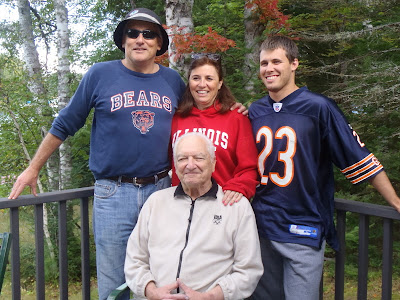 "I am taking Bears straight up on Thursday and beginning to wonder whether the Pack will win any games this year at all."