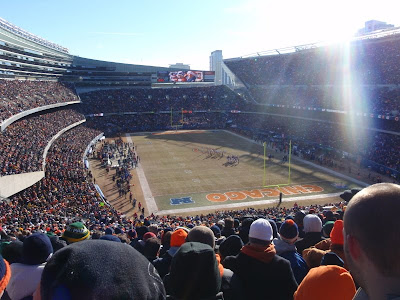 Our Seats
Shit. Had fun at the game, but ... this was an eminently winnable game lost by the Bears coaching staff. When I say "the Bears coaching staff" , I mean "Lovie Smith'. Still, we need to face facts. It appears that the Green Bay Packers can indeed beat the Bears by a single score, just as long as:
My favorite post-mortem quote is from Haugh's column in the Trib:

"When they pull the account of this historic game out of the time capsule, this won't be the game Cutler quit on the Bears. It will be the game the 2010 Bears finally ran out of luck and Smith coached his way into the offseason. Why was Collins ahead of "emergency quarterback" Caleb Hanie on the depth chart anyway? Collins shouldn't have been on the roster, let alone in a game to decide the Super Bowl... If Smith signs a contract extension soon, as expected, it will be because the front office chose to ignore his coaching effort against the Packers. Why did Smith punt instead of let Robbie Gould try a 49-yard field-goal attempt down 14-0 in the second quarter? Why run Bennett around left end — a wide receiver who isn't Devin Hester — on third-and-3 with 1:15 left on the potential game-tying drive? Why not use the final timeout to call a smarter play on fourth down?"

Exactly. I wanted Lovie out before the season started and after this disaster they give him a 3 year extension. Cripes. I hope they at least put a clause in the contract that forbids him from making any challenges or calling any time-outs and plays in the last two minutes of either a game or half. If he just delegates those task to someone else we may have a chance. In any case - some scenes from a disappointing but fun day at the game... 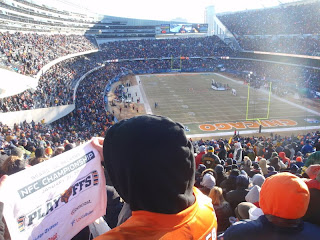 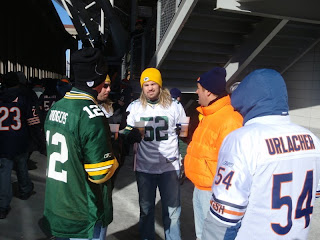 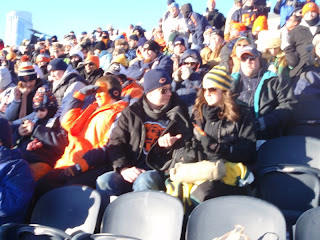 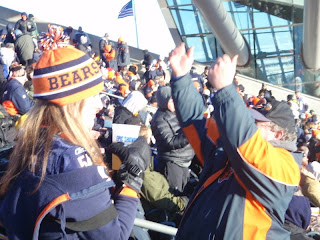 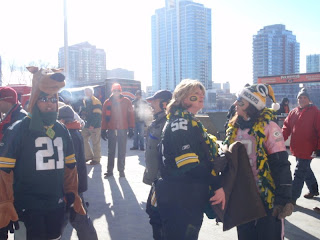 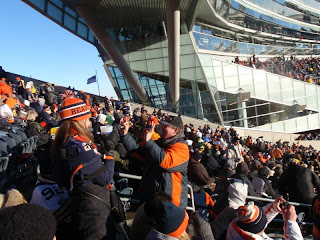 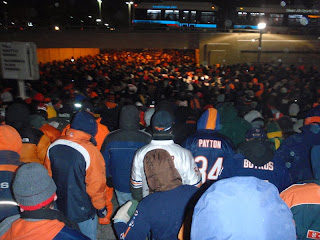 Congrats to the Packers, who will certainly represent the NFC North well in that exhibition game accompanying the Black Eyed Peas concert scheduled for two weeks hence. They are a fine team. But as for Packer fans, well... 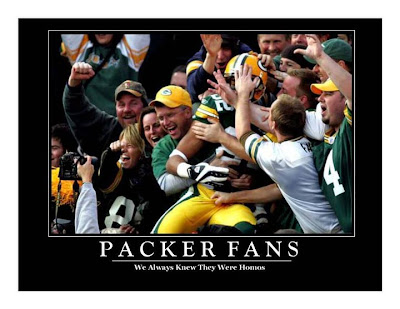 Not that there is anything wrong with that.
Posted by mw at 10:09 PM

I am informed by my nephew the Packer fan that this last image might be considered bigoted and derogatory. Looking it over, I think I see what he means. So let me take this opportunity to offer my sincere apologies to the entire gay community for the thoughtless act of comparing them to Packer fans.