City of Champions and Irrational Extremists 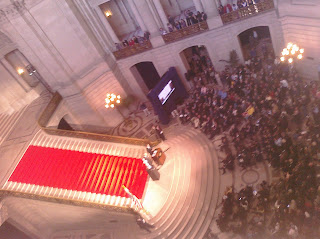 I was at SF City Hall for a capital committee meeting for Rec and Park (not the picture above - more on that later). I thought I should attend after learning about the latest WEBLEEDU (Wild Equity Biodiversity Litigation for Ecological Extortion and Deep Untruths) coalition effort to destroy the Sharp Park golf course. This one was utterly bizarre.

Having failed to make the scientific case to close Sharp Park based on the protection of endangered species who have thrived at the park since it was created 70+ years ago, then failing again to close the park by promoting false and misleading statement about the financial status and popularity of golf at the park, and also failing (thus far) to intimidate The City into closing the course with threats of laughably and provably pointless lawsuits, they came up with a real doozy. They were at City Hall to fight the funding of a job-creating, stimulus-subsidized, PUC-sponsored, City of San Francisco, and Pacifica supported project to bring recycled water to supply the course. Really. I am not shitting you. A coalition of ostensible "environmentalists" were fighting to stop a project to use recycled water instead of potable Hetch-Hetchy reservoir water at Sharp Park. Needless to say, they lost this one too as the commission voted unanimously in support of the project.

Next up for WEBLEEDU - more baseless lawsuits. That's ok. One thing we have no shortage of in San Francisco are really good lawyers. No judge in the world is going to rule to close a course in the face of a good faith plan to enhance the habitat for the protected species that is based on unimpeachable scientific support and sponsored by the most environmentally progressive City government in the country. It is purely an intimidation and EAJA compensation ploy. That's what WEBLEEDU does. Envriornmental bullying, and the City must stand up to it.

Anyway, I knew something about this water issue, and may have inadvertently provided the WEBLEEDU's with some ammunition. A couple of years ago, I highlighted the potential for stimulus fund waste on this project if our Board of Supes were not willing to stand up for golf at Sharp Park. Since then the mayor, most of the Supes, the local government and our Federal representatives have aligned themselves with popular support for the course, so no problem. Anyway, I felt obligated to show up at the hearing as penance for my earlier faux pas.

While there, I ran across a rotunda celebration of Larry Ellison bringing the America's Cup event coming to the city: 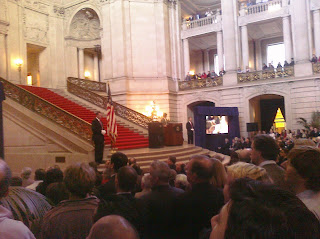 I just keep running into this trophy. As I've noted before, I think this is all very cool and will be a great boon for the City. Of course that does not prevent our local pols from embarrassing themselves as pointed out by SF Mike (who, as usual, has much better pictures and a somewhat different opinion of the benefits).

Moving on, before leaving the rotunda area, right across the hall I see this line... 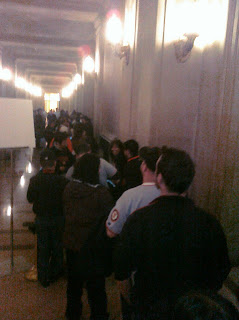 It is the continuing SF Giants World Series celebration! 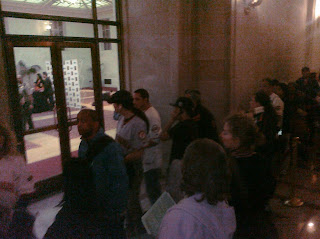 Fans have donned their finest orange & black to line up and have their picture taken with the World Series Trophy (almost visible through the glass in the picture above).

It all just seemed like a really good way to kick off the new year.