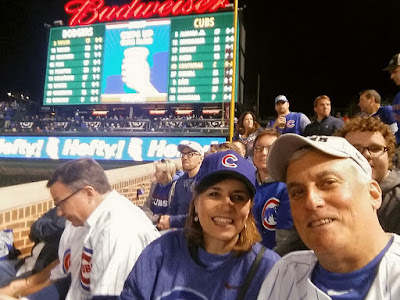 After the Cubs finally won a game in the NLCS against the Dodgers at Wrigley, hope sprung eternal in this Cubs fan. Sure the odds of coming back from a 3-1 deficit was daunting, but I had to get to Wrigley for game 5.  This would either be the Cubs last game of the season, last game at Wrigley, and last game  as defending World Champions, or it would give us momentum and a more realistic hope at 3-2 to fight our way back to the World Series. I mean, after that crazy game 5 against the Nats, anything seems possible. 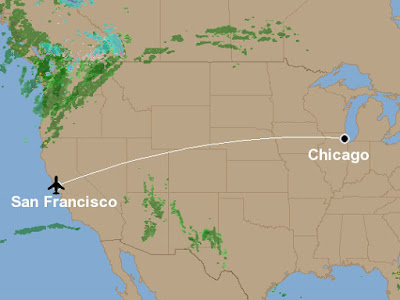 
My brother Harlan found us a great deal on tickets... 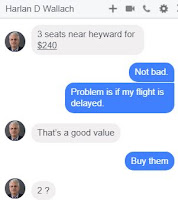 ... and my sister Wendy picked me up at Ohare. 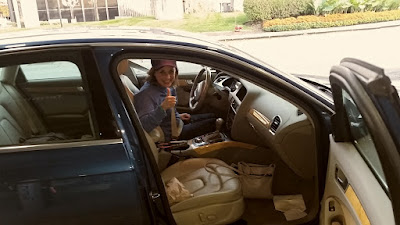 I needed some basic sustenance and grabbed a Chicago Dog at the airport  to maintain my strength as Wendy fought through traffic. 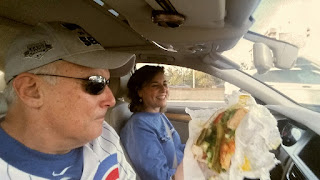 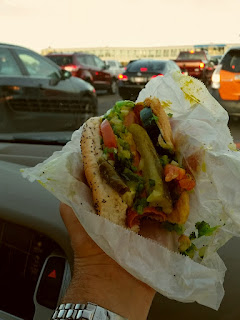 We got to Wrigley by game time, but Quintana was already pitching as we waited in line to get through the gate. 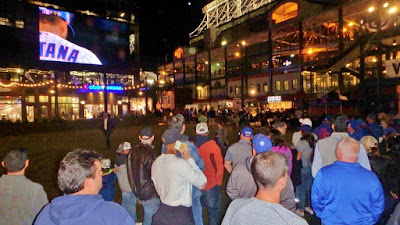 The seats on row four of the right field line were great ...

...but by the time we sat down, the Cubs were losing. By the time I finished my first beer, Quintana was out of the game. By the time I located the Italian beef stand, the game was out of hand.  On the plus side, we found cousins Daniel and Hannah at the game. 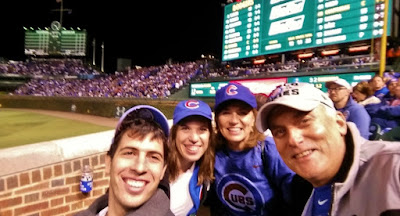 We had a fun time chatting and generally ignoring the on-going disaster on the field. Look,  I spent a lot of years watching terrible Cubs teams lose while still enjoying the ambiance of Wrigley Field, so I cannot say this feeling was unfamiliar to me.  I'd like to say it is more tolerable to watch a very good team like this lose, but I'm not so sure. In the old days, my expectations going into the park were quite a bit lower.

I guess I need to wrap this up with the game itself, and lets give the Dodgers their due with coverage from the LA Times:


Kershaw looked formidable from the start. He snapped a pair of curveballs to fan Cubs outfielder Albert Almora, Jr. His fastball touched 96 mph. He ended the inning with groundouts from third baseman Kris Bryant and first baseman Anthony Rizzo, the neutralized heart of the opposing lineup.

When Kershaw retook the mound in the second, his lead had doubled. Hernandez blitzed Quintana for a first-pitch, solo homer. An inning later, the Dodgers forced Quintana off the mound with the bases loaded. Maddon opened up his bullpen, a group of relievers as volatile as nitroglycerine in the sun, and watched Hector Rondon hang a slider to Hernandez, who pumped his fist as the baseball landed in the basket above the ivy

The slam freed Kershaw to attack the Cubs. A seven-run lead expanded to nine in the fourth, after Logan Forsythe stroked a two-run double. Kershaw’s bid for a no-hitter ended when Bryant hit a solo homer in the fourth. He did not permit another Cub to reach second base."

So it goes. I attended two Cub games this year, one at ATT Park, and this game at Wrigley. I am 0-2 on the season. Still, I can't complain. This was the best 3 year streak of my life as Cubs fan. Three division championships. three National League Championship Series, and a World Series.  I am sure there will be changes to the team before Spring Training but at this point I am happy to #TrustTheo. We'll see a familiar but different team on the field again in 2018. We can expect some of our favorites will be playing in other uniforms, and we'll have some new stars on the field. With this front office, we can also expect to see another contender playing quality baseball.