Hurricanes and Sailboats - There and Back Again

I can't take my eyes off the devastation wrought by hurricanes Harvey and Irma in the Caribbean and Gulf of Mexico last week. Hoping for the best for friends and relations in Texas, across Florida, and the Virgin Islands - both now and in the coming days.

I guess it's simple human nature that the images that come out of these catastrophic events hit harder when it's a place you've been, recognize, enjoyed, and impacts people you care about.

UPDATE 9/11: While there is extensive damage across Florida, it is clear that civic preparation, media warnings, and a shifting/weakening Irma track kept the damage from being as bad as was feared. However, while Florida somewhat dodged a bullet, people should recognize that the British Virgin Islands took the brunt of Irma at it's peak strength. There were deaths, massive destruction, and a breakdown of society. From the Daily Mail:

"Anarchy In the Caribbean"
"Escaped prisoners and hundreds of looters armed with guns and knives terrorise hurricane-hit islands as police from Britain and France are flown in to restore order.
Several people who were stranded on the island said looters had begun raiding hotel rooms and homes to profit from the natural disaster. Jos Smart, 26, and his girlfriend Julia Taylor, 30, reported being too afraid to leave their 'half-destroyed' hotel amid reports of looting and violence outside. Describing the apocalyptic scenes in St Maarten Jos Smart's father Ian said: 'They have not had any water for a day. 'They said the sounds were apocalyptic and they have likened it to a war zone. They are holed up in a half-demolished bathroom and their phone is running out of battery. There have been rats in their room looking for food. He added: 'At night time there were people knocking on their door, and so there are 12 hours of sheer blackness to get through with the terror of who is going to knock down the door."


In 2013 I had the opportunity to crew for Captain Jim on the Morpheus for a transatlantic passage from the Caribbean to the Mediterranean. It was a great "bucket-list" experience. The journey started in Sint Maarten - a Caribbean Island split between the French and Dutch. After outfitting Morpheus for the journey, we spent an afternoon at the famous Sunset Bar and beach abutting the SXM airport runway. Here a picture of the bar and beach from the jet as I landed, and a picture and video of what it looks like after Irma: 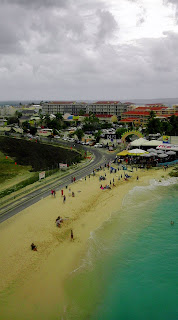 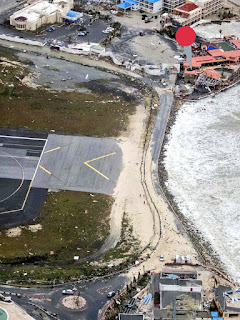 
In November, I'll have an opportunity to again sail with the Morpheus as she makes her way back over the pond and home. Planning has begun, but as is often the case, nature has the final word. Saba Rock in the British Virgin Isles was our planned destination. This is what it looked like when the planning began: 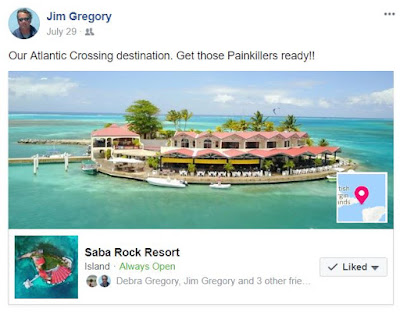 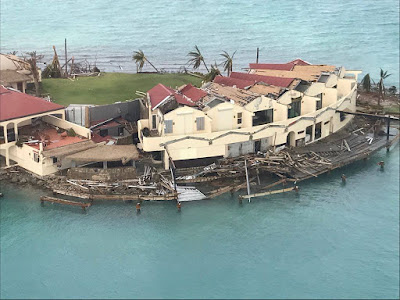 Another considered destination is the Bitter End Yacht Club: 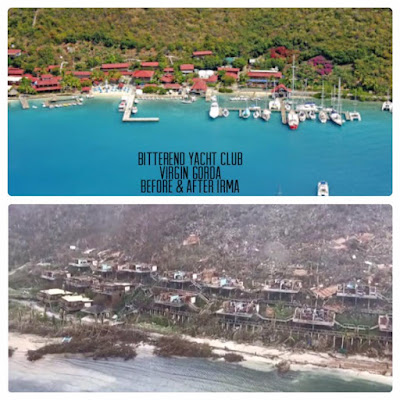 I know some of this discussion of yacht marinas and luxury resorts comes across as "First World Problems", but these islands depend on tourism for their financial livelihood. Lisa Minot, Travel Editor for the Sun, hits the nail on the head:

"For the British Virgin Islands, St Martin, Anguilla and Barbuda, tourism is the lifeblood of their economies. Thousands rely on holidaymakers for their jobs and livelihoods.

The graphic images of destruction are already having an effect. British Virgin Island local Emma Paull says: “We need the tourists to come back. Yes, we have been hit hard but we can get better. People are already emailing to cancel holidays booked for next year.

“But we need the income to recover. Trees grow back, boats can be replaced, bars and restaurants won’t take long to repair. From the ashes, roses grow.”

Thankfully, British holidaymakers have always been a hardy bunch. And returning to help support these idyllic islands is the only way we can truly help them."

Probably the best thing we can do (After contributing to Texas, Virgin Islands & Florida relief funds) is to continue to plan to patronage the area in the hope they can repair it between now and then. I've no doubt that they have the strength, spirit and will, but with the scale of devastation wrought by this hurricane, I'm just not sure there will be enough workers to get it done before complete our passage in December.

Anyone with the wherewithal should do what they can to help the people impacted by these catastrophic storms.