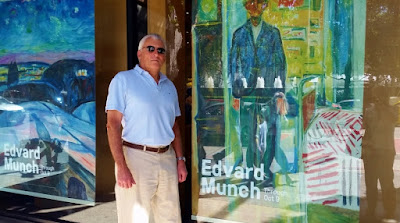 I've always liked Edvard Munch's work, and didn't want to miss the well reviewed touring exhibition at SFMOMA. The exhibit is best viewed with Sigrid - my personal art guide and consultant - who arranged timed tickets for our ongoing 25th anniversary season celebration.  As part of that continuing celebration, we arrived early to explore the expanded & renovated SFMOMA facility... 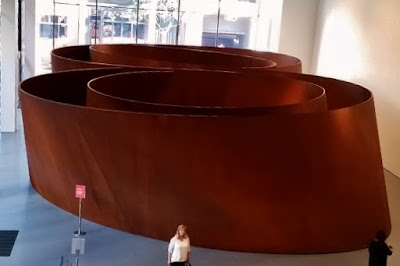 ... and enjoy a tasty if overpriced lunch in the sculpture garden

The Munch exhibit is fascinating and well curated, offering a perspective on the life that shaped his art and the contemporary artistic influences he both absorbed and influenced himself. 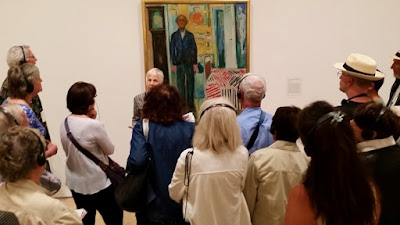 I won't attempt to review the exhibit as that is simply beyond my ken. Instead I'll include a few of the images that caught my eye (non-flash photography is permitted) and refer the reader to ... 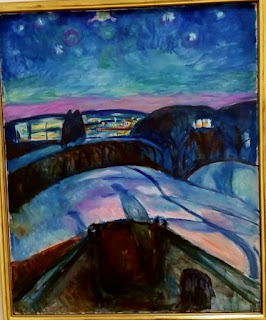 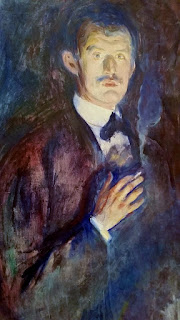 "A major Edward Munch painting exhibit, on loan from his namesake museum in Oslo, has just opened at SFMOMA and it's well worth visiting. Even though there doesn't seem to be a single happy person on display in any of the 47 paintings, the effect is not depressing, possibly because the colors throughout are so gorgeously vibrant, including the 1907 The Death of Marat ...


Directly before his eight-month, 1908 hospitalization for anxiety, binge drinking, and brawling, he painted a number of commercially successful variations on The Sick Child, dying of tuberculosis. "As part of his recovery, Dr. Jacobson advised Munch to only socialize with good friends and avoid drinking in public." Munch followed Jacobsen's advice and though plagued with illness all his life, he managed to survive to age 81, dying in Nazi-occupied Norway in 1944. He also continued painting to the end and it's all great." 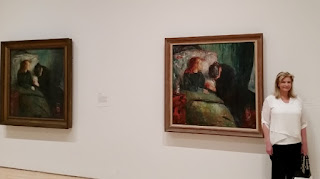 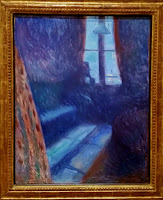 Charles Desmarius of the SF Chronicle:

"Munch’s significance lies neither in his oversensitive soul nor his painterly inventiveness, but in his unique ability to combine the two. He returned again and again to the same themes, and often to the same image. One could argue that makes him a formal experimenter — testing and revising art for art’s sake — or that his romantic heart could not bear to leave behind loves and moments that might die without continual regeneration. He did not have to choose...


There are ghostly pictures like a “Self-Portrait with the Spanish Flu” (1919), ominously psychosexual ones like his hovering presence in “The Artist and His Model” (1919-20), and a cartoonish throwaway that could be a magazine liquor ad, “Self-Portrait With Bottles” (circa 1938)."

Munch was an artist both a product of and ahead of his time. Perhaps the work that best exemplified this was his startling and prescient work entitled (as I recall) "Clinton Trump Second Debate": 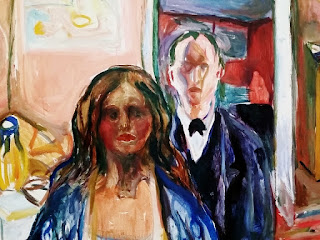 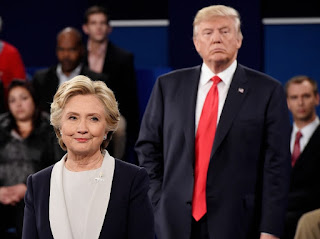 Wow, I've been quoted by the San Francisco Opera (for "Elektra") and Michael Wallach (for "Edward Munch") in the same month. Not sure if I will be able to handle all this public validation. And yes, I loved the neurotic Munch exhibit so much that I had to pay to see it last week because I had run over my maximum number of visits to the "special exhibition" with my museum membership. Thought of making a scene but didn't.