"On the San Francisco Peninsula there is a wealth of good golfing territory. The sand dune country owned by the Olympic Club, which although not so spectacular as that on the Monterey Peninsula, is the finest golfing territory I have seen in America... The municipal courses in San Francisco are far superior to most municipal courses. The newest, which we constructed at Sharp Park... has a great resemblance to real links land. Some of the holes are most spectacular." - Alister MacKenzie - Spirit of St. Andrews

It was the golden age of golf course design. San Francisco was eager to show off its magnificent new courses. Hoping to draw tourists to the City, golf was front and center as a primary attraction to entice visitors from afar. This full page ad from the December, 1933 edition of the Saturday Evening Post featured an illustration of Lincoln Park's 17th tee. As a golfer, or a San Franciscan, you've got to love the copy:

"Out on the very tip of the peninsula of San Francisco, right above the Golden Gate, there is a golf course. Playing there for the first time, you will have difficulty in keeping your mind on the game. 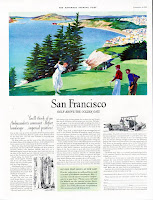 Up three holes you top the crest of the hill, crowned by the classic Palace of the Legion of Honor. And suddenly there bursts upon you the wide sweep of the blue Pacific.

Below the steep cliff that edges the fairway are the famous Seal Rocks and the Cliff House. Straight out thirty miles in shadowy outline, the Farallon Islands. And still on, a thousand leagues beyond the horizon, your mind may picture the Isles of the Pacific and the Oriental lands to which this  port of San Francisco has always been the gateway. South along the Coast for miles white-topped breakers roll in on the sandy beach, beside which run bridle paths and the Great Highway.

Northward, you look squarely across the Golden Gate to Lime Point and the Marin hills, dominated by the purple bulk of Mount Tamalpais.  Pausing, looking over the sea and the city, you may recall James Bryce's comment that San Francisco; "like Constantinople and Gibraltar, combines a perfect landscape with what might be called an equally imperial position," noting that  "the city itself is full of steep hills rising from the deep water; the air keen, dry and bright, like the air of Greece, and the waters not less blue. Perhaps, you will agree, "it is this air and light, recalling the cities of the Mediterranean, that make one involuntarily look up to the tops of these hills for the feudal castle or the ruins of the Acropolis."

Well, a long look, a deep breath of the sea-tanged air, and back to the pleasant business of smacking a golf ball down the green fairways. Each tee is a new glorietta with a new view of ocean, Golden Gate, or city. And as you reach the final holes, the town, spreading tier on tier, up over the hills, seems fabulous and magical in the rosy glow of the ending day. Later, ruddy with the tonic of San Francisco's out-of-doors and with the spray of the sea seemingly still in your nostrils, you are ready fora typical San Francisco evening..."

Yeah, that's exactly how I feel after a round at Lincoln. I just can't wait to use the word "glorietta" with my foursome.

But that's exactly how to promote San Francisco as a golf destination. The hi-tech start-up hype from our SOMA marketeers had nothing on those depression-era promoters. Still - some of the copy is today quaintly out-of-date:

"Come by train, automobile, steamer or plane. You'll be pleasantly surprised at the nominal cost of living here."

If you come to San Francisco today, you may not be pleasantly surprised at the "nominal cost of living", but for a nominal fee, you can still enjoy our extraordinary and historic public courses.

The disclaimer in the final two lines of the ad are amusingly and recognizably "San Francisco". The writers wanted to make a clear distinction between those who were welcome and those the City would prefer to see visiting elsewhere...

"While attractions for the tourist are unlimited it is necessary to advise those seeking employment not to come at this time, lest they be disappointed."

We still look to tourist largess to fund our City government extravagance.

The more things change, the more they remain the same.

Cross Posted at San Francisco Public Golf Alliance
Posted by mw at 10:20 AM

Love the very purple prose describing the Lincoln Park views, though as we both know they are surprisingly accurate.