This is the year. 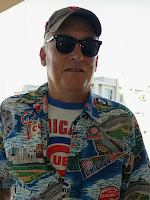 The Cubs don't give their die hard fans many opportunities to believe.

I'm "All-In" on this team because - well, because the Cubs don't give their die hard fans many opportunities to believe.

Yeah, I still bear the deep psychological scars of the 1969 Choke, the 1984 Collapse, the 1989 Beat-down by Will Clark and the Bartman Ball. No matter. This is the year.

Stats would indicate the Cubs don't have much of a chance at AT&T Park today. The Giant's home-run hitting ace and World Series hero Mad Bum is on the mound (and probably should be batting clean-up). Harem has been less than stellar in his debut with the Chicago Cubs and got bombed in his last start against Atlanta. This will be a good test for the hot but young Cubs team. If these rookies are going to go deep in the playoffs, they are going to have to find a way to beat the best at their house.

"Cubs will star in a live version of a roadrunner cartoon the next two days, facing two of the best pitchers of this generation. They’ll try to avoid having an anvil falling on their heads this afternoon at AT&T Park against Giants left-hander Madison Bumgarner. On Friday night at Dodger Stadium, they’ll try to escape a rocket-propelled ACME Co. bomb, taking on Cy Young-winning lefty Clayton Kershaw of the Dodgers. Even if the Cubs suffer the same fate as Wile E. Coyote, the experience could be beneficial in the postseason, assuming they continue to hold onto their sizeable wild-card lead of 6 ½ games after Wednesday’s 4-2 loss to the Giants."

I am meeting friends at Momo's around 11:30, will be at the bar wearing my colors and figuring out the ticket situation. I'll also buy a beer for anyone who comes up to me and can recite the Opening Day Lineup for the 1969 Chicago Cubs. More pics later. Probably.

UPDATE:
Walked most of the way, Broadway to the Embarcadero.  Checking out the rotating re-purposed Burning Man Art is a mandatory stop on the way to ATT Park.
I think this piece has passed it's "Use-By" date and I'm ready to see it replaced by something from the current Green Bug Burning Man. Took a rickshaw when it looked like I was going to be late. 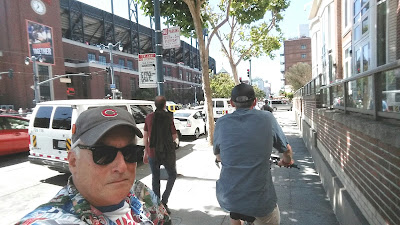 The rickshaw driver is a Giants fan. Not sure how he feels about hauling my ass to the park. 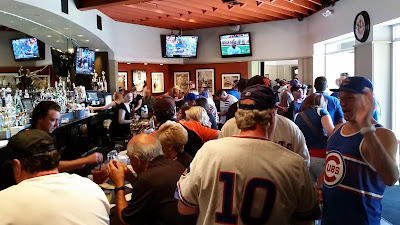 There was plenty of blue at Momo's, as the Cub fan contingent was well represented. 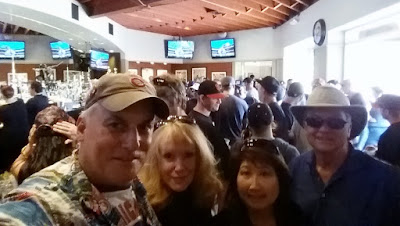 Met some old friends who already had tickets, then settled down to a couple of beers with Roy and watch how prices would fare closer to game time.

It worked out well. Paid face value for Club Level tickets 10 minutes before the game right outside the bar. 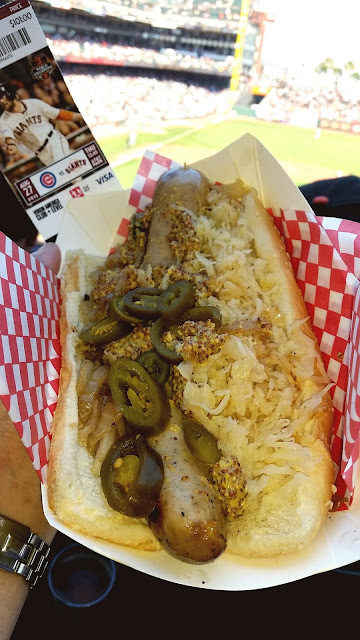 I like Club level. Lots of good food and beer options. Settled on a grilled wurst they promote as a "Sheboygan Brat". I find that odd, as I am pretty sure I am the only one in the park who knows where Sheboygan is. I've been there, and this is a better Brat than any I've seen in Sheboygan.


"Giants' ace finishes month 5-0 after fanning 12 through six, allowing two hits and making acrobatic play...  Bumgarner displayed his characteristic dominance Thursday with 12 strikeouts in six innings during the Giants' 9-1 victory over the Chicago Cubs. But San Francisco's ace most impressively maintained control of himself on foot, not on the mound."

As noted earlier, the Cubs figured to lose on the stats and matchup. But Heren pitched even worse than his ERA, and Bum just mowed the Cubs down through six.

I can't say I even got upset when this happened. The game was already well out of hand.

As a Cub fan, one develops a finely tuned instinct of when something bad is about to happen. I decided to video this pitch. Kelby Tomlinson's first major league homer is a Grand Slam against the Cubs.
Posted by Michael Wallach on Thursday, August 27, 2015


Hopefully a learning experience for this young team.