We won't bury the lede, but we will save the punchline for the end. 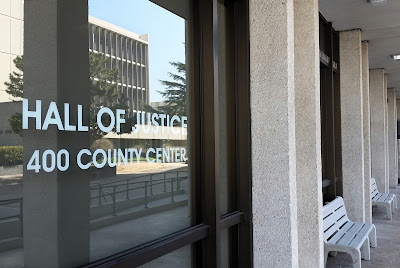 On June 15, the Wild Equity Institute filed yet another Sharp Park lawsuit. This one was filed in San Mateo Superior Court against the California Coastal Commission as well as the City and County of San Francisco and is intended to stop the Sharp Park Safety, Infrastructure Improvement and Habitat Enhancement Project.  Shortly after filing the lawsuit, WEI also filed a motion asking the Court for a preliminary injunction to stop the project currently underway at Sharp Park.  On Thursday, August 20 Judge George Miram denied the motion - as covered by the San Francisco Public Golf Alliance: 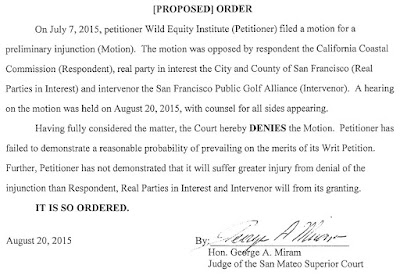 "In denying Wild Equity’s motion for preliminary injunction, San Mateo Superior Court Judge Miram found that Wild Equity failed to show that it would likely prevail at trial, and also failed to show that it would suffer greater injury from denial of the injunction than the Coastal Commission, the City and County of San Francisco, and the public course golfers represented by intervener SF Public Golf Alliance would suffer from the granting of the motion."

That's the news. It's good news. But what is missing in the polite legalese description preferred by lawyers and courts, is the complete freaking batshit insanity of this absurd motion by WEI.

For that, we need to take a step back and look at the context. Let me be your guide...

What is the "Pump House Project"?

As summarized by the SFPGA:


"The Pump House Project includes habitat enhancement for the frog and snake, construction of a new frog pond south of the pump house, much-needed infrastructure work at Sharp Park including safety improvements at the pump house, moving the cart path out of the lake at Hole 15, and dredging cattails from a small area of Horse Stable Pond and the connecting channel."

All told about $400,000 and 5 months worth of work. Not a big project, but important and necessary to both the frog and the course.

Who Approved This Project?

It might be easier to list who didn't, but we'll let the City Attorney's Office representing the City and County of San Francisco describe the legal, administrative and political approval process to date - This from their defense memorandum filed in objection to the WEI motion:


"... The U S Fish & Wildlife Service (" the Service") issued a Biological Opinion authorizing continuing golf course operations at Sharp Park and requiring San Francisco to implement this Project to improve the habitat in Sharp Park for the California red-legged frog (" the frog") and the San Francisco garter snake (" the snake") The Project, which Wild Equity challenges in this lawsuit, is subject to approval not only from the Service, but also from the Army Corps of Engineers, the San Francisco Bay Regional Water Quality Control Board, the California Coastal Commission, and California Department of Fish and Wildlife..."

In addition to all of the studies and approvals of the San Francisco Recreation and Park Department sponsored Pump House Project by all of those agencies, the political process also included supporting votes by the San Francisco Board of Supervisors, San Mateo County Board, and the Pacifica City Council.  As if  running the gauntlet of studies, votes, and City, State, and Federal bureaucratic administrative approvals was not sufficient validation, this selfsame project has also survived two previous lawsuits and an Appeal, in both federal and state courts, all of which supported the process and the plan. We are now on the third lawsuit led by WEI to stop this project.

What is the Project Status Again?

As the project needs to be complete before the winter rains in order to improve the frog habitat, and also to meet the Fish & Wildlife Service deadline for the City, the work is well underway.  The cart path on 15 has already been moved 12 feet out of the lake: 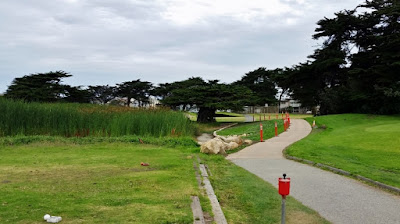 And real environmentalists (as opposed to eco-litigators with mixed motivations) were up to their armpits in the swamp  - cutting cattails, opening waterways, building new ponds - doing the hard work of maintaining this managed fresh-water habitat so it will continue to be hospitable for the threatened frog:

Which brings us to the last question...

WTF Is WEI Suing About Now?

The California Red Legged Frog (CRLF) is a fresh water species. Laguna Salada was converted from a brackish lagoon to a fresh water lake by the creation of the Sharp Park golf course and the sea wall berm that protects the course, neighborhoods, and the Coastal Highway from seawater incursion. This is an accidentally man-made habitat for the frog, created by human intervention in the natural process, but it can be maintained indefinitely as perfect habitat for the frog for exactly as long as it is actively managed by human intervention. That means keeping sea water out of the lagoon during the dry season and pumping fresh water out of the lagoon during the rainy season so it does not flood the course, causing frogs to lay eggs in temporarily flooded areas where the egg masses may be stranded. You don't have to believe this blogger on this issue. This is what the staff of the California Coastal Commission said in their comprehensive report recommending approval of the project about the consequences if the Pump House Project did not go forward:

There would be biological impacts as well. The lack of wetlands management in years of low precipitation could potentially further allow sedimentation and vegetation to continue to build up, eventually “choking off” the pond, reducing CRLF open water breeding habitat. The pumps could also clog, perhaps to the point where they would be unusable.

The safety improvements for workers would not take place, which would make it more difficult to maintain the pump house, would put the City at risk of worker claims, and discourage fine-tuning of the pumping protocol consistent with the USFWS Biological Opinion due to the difficulty in reaching the site.

Sharp Park is unusual in that natural conditions are not necessarily the best conditions for the sensitive species in question here. Under completely natural conditions, without the berm and with no pumping, CRLF would probably not exist at the site as the water would be too brackish. The CRLF began surviving at the site after the water became less salty. Further, if the quantity of water completely followed nature, uncontrolled precipitation levels could result in marginal breeding habitat on the edge of the course, disconnected from the wetlands and isolating the CRLF egg masses."

This is a picture of the Pump House in question.   It houses the pumps used during the rainy season to maintain correct water levels in Laguna Salada - which keeps frog eggs in the lagoon where they'll hatch and not on a temporarily flooded golf course where they might not. But to keep the intakes clear, pumps maintained, and Laguna Salada water levels optimized for the frog, residential neighborhood and golf course, San Francisco Rec & Park workers need to scramble down a muddy hill to the Pump House at the edge of the lagoon, past a failing old wooden retaining wall, and often do so while a howling Pacific storm is pounding the coast.  To remedy this safety hazard, and make it easier to control this managed habitat, the City plans to build some stairs, walkways, and railings for the benefit of the City employees doing this thankless work.  As described in the City project proposal bureaucratese (Exhibit 2):

"... the pump house is in need of improvement (§30233(4)), to reduce obstructions of water flow to the intake and improve worker safety. The improvements will allow City personnel to monitor and manage water levels, which is necessary to protect California redlegged frog (“CRLF”) egg masses during the rainy season and reduce flooding of the golf course and the risk of flooding of neighboring residential areas. Further, the safety improvements are necessary because City personnel must monitor water levels in inclement weather. Second, wetlands restoration and creation will improve functions and values (§ 30233(6)), and thereby enhance existing CRLF habitat. Approval of the proposed project will therefore assure the continued operation of this vested public service use, promote the safety of City employees, and restore the functionality of the surrounding wetlands."

To make these common sense improvements that benefit everyone at Sharp Park, including the frog, golfers, neighbors and employees, the project specifies that cement piers supporting the walkway will be installed in the wetland area surrounding the pump house. This will result in 1.7 cubic yards of fill in the wetland and impact 12 square feet of the pond surface area for the pathways.

From the "CALIFORNIA COASTAL COMMISSION' S OPPOSITION TO PETITIONER' S MOTION FOR PRELIMINARY INJUNCTION" brief in defense of the project against WEI's motion:


"In connection with the infrastructure and safety improvements to the Pump House, part of the project includes the removal of vegetation and sediment in a 12' x 12' area near the pump' s intake structure, pouring cement for piers to support a walkway that will hang over the water, and the minor expansion of an existing retaining wall. This very small piece of the project, including the installation of the piers for the short walkway and work on the retaining wall, will result in approximately 1.7 cubic yards of fill in the wetlands and impact 12 square feet ( 1.33 square yards) of the water' s surface area — approximately .0003 of an acre."

That's it. That is the reason for WEI demanding a preliminary injunction from the Court to stop the Pump House Project. We are litigating 1.7 cubic yards of fill and 1.33 square yards of surface area representing .0003 acres in a 27 acre wetland of a 417 acre park.

Lets do the math... I calculate that to be .00001% of the wetland.   That translates to 1/10,000,000th (one / ten millonth) of the managed wetland habitat at Sharp Park will be impacted in order to implement a project that permits workers to safely and effectively maintain and manage the water flows to the benefit the threatened species completely dependent on active human management of this habitat. Not to mention preventing flooding in local neighborhoods and of Highway 1.

That is what this hearing and judgement was about. With a record El Niño waiting just over the horizon, WEI feels it is more important to risk accurate management of the frog's habitat, the health and safety of City workers, flooding of neighborhoods, Highway 1 and the beloved historically important Sharp Park golf course, all in order to avoid filling 1.7 cubic yards of a 27 acre wetland.

And they are asking the Judge to accept their opinion over that of the California Coastal Commission, U.S. Fish & Wildlife Service, Army Corps of Engineers, San Francisco Bay Regional Water Quality Control Board, California Department of Fish and Wildlife, San Francisco Rec & Park Department, the San Francisco Board of Supervisors, and State, Federal, and Appeals Courts, all of which passed judgement approving this project.

What is the bottom line?  You give it a try.

Fill in the blank: