The 9th Circuit has something to say about WEI's appeal of their dismissed Sharp Park lawsuit. 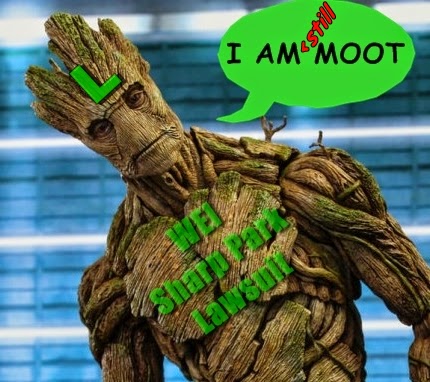 Two weeks ago the United States Court of Appeals for the Ninth Circuit heard oral arguments for a Wild Equity Institute (WEI) appeal of district Judge Susan Illston's December 6, 2012 decision to dismiss the WEI lawsuit against the City of San Francisco and Sharp Park golf course. She dismissed the case as "moot".

Today the 9th Circuit Court of Appeals rendered their judgement of the WEI appeal.

Before we get to that judgement, a bit of context. In a recent post I attempted to translate the lawsuit legalese by offering my decidedly non-legal understanding of the merits of the WEI appeal. To whit:


"In this case, in simple terms, the Wild Equity Institute sued the City of San Francisco over whether they had the right permits and permission to continue golf operations, enhance the frog habitat, and provide needed infrastructure maintenance. The judge determined that the City did indeed have the correct permits and permissions, found the WEI lawsuit moot, and dismissed the case. WEI subsequently declared victory, and asked their legal fees to be reimbursed as a reward for managing to successfully get their own lawsuit declared moot. After the judge granted them 1/4 of the legal fees they wanted they issued another triumphant press release. Then they subsequently appealed the judgement of the lawsuit they claimed that they won.  For us, the untutored, non-lawyerly, great unwashed, this comes across as complete horseshit."

As it turns out, the 9th Circuit Court of Appeals agreed with my assessment. Perhaps the most remarkable aspect of their decision is that it was rendered in only 600 words and less than two weeks after hearing oral arguments. 100 of those 600 words were consumed by the title of the lawsuit and listing the litigants.  Cripes, I can't even write a blog post introduction in under 600 words.

Alright. I've teased this long enough.  Here is the decision -  almost in it's entirety:

"Wild Equity Institute appeals from the district court’s order dismissing this case as moot. This case originated as an Endangered Species Act (ESA) Section 9 claim against the City and County of San Francisco, which was then operating Sharp Park Golf Course without any type of ESA permit. After Wild Equity filed suit, the City requested that the Army Corps of Engineers initiate consultation with the Fish and Wildlife Service (FWS) under ESA Section 7 in connection with the City’s application for a Clean Water Act (CWA) Section 404 permit. The district court stayed proceedings pending the outcome of the consultation, then concluded that the case was moot once FWS issued its Biological Opinion and Incidental Take Statement (ITS) following the Section 7 consultation. Wild Equity argued on appeal that the ITS had no independent force prior to its incorporation into the City’s CWA permit. However, the Corps has since issued the relevant permit, which incorporates the terms of the ITS. California has also provided its state certification as required under CWA Section 401. Accordingly, and as Wild Equity has acknowledged, this appeal is moot...

The issuance of the ITS and CWA permit have also fundamentally changed the legal landscape within which the parties are operating, reducing the likelihood that this issue will arise again between these particular parties... We therefore lack jurisdiction over this appeal. APPEAL DISMISSED."

I believe I have become adept at translating legalese into common parlance. Given that this decision was rendered so quickly (2 weeks), and so succinctly (600 words) , and specifically called out as a "memorandum"  disposition that is "not appropriate for publication and is not precedent" (i.e. not all that important) - I conclude that the 9th Circuit Court of Appeals disposition of the Wild Equity Institute Appeal can be distilled to: "Why the f**k are you putting this crap in front of us?"

We can't say "thank you" enough for the continuing good work from the San Francisco City Attorney's office led by Dennis Herrera and represented in court by Jim Emery, the San Francisco Public Golf Alliance founded by Richard Harris & Bo Links, and Joseph Palmore from the offices of Morrison & Foerster.

On to the next battle. They've lost the political battle with both the Pacifica City Council and the San Francisco Board of Supervisors. They've lost in Federal Court. They've lost in the court of public opinion. Now they are moving to regulatory agencies, specifically the Coastal Commission. The hearing is in two weeks. Onward.