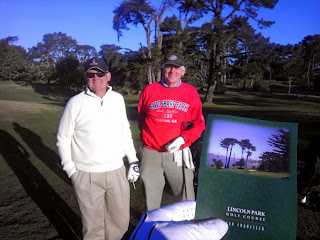 On the second stop of my comeback tour. Bob and Rick on a beautiful morning at Lincoln Park.

UPDATE/EDIT 1/6/14: Your loyal blogger suffered a catastrophic technical failure on the course yesterday. The HTC smartphone battery was depleted by the 3rd hole. We did take a few more pics, I thought they were posted, but they appear to have disappeared into the ether. At the turn, I replaced the battery with what I believed to be a fully charged replacement (and replenished the foursome spirits with the traditional beer waiting in the cooler). Alas, it also crapped out in a few holes.

At this point I cannot say what happened. I suspect that this was simply an act of god, telling me it is time to finally replace the HTC smartphone, and/or telling me to never reveal what transpired on the course.

The remaining pics are still in the phone, but I fear I will be tempting fate by trying to post them now. Best to let these sleeping stories lie.

Nice to see the Rick and the Bob in the above photo. The real question is did you shoot somewhere between the low 90s and 100 as your surgeon promised?

Michael,
The malpractice suit is being prepared as we speak. I cannot comment further on the advice of my lawyer.

I also will refrain from commenting as long as photos from the 11th hole are not published.