At City Hall for another skirmish in the Sharp Park Golf War. Latest dispatch from the front line. 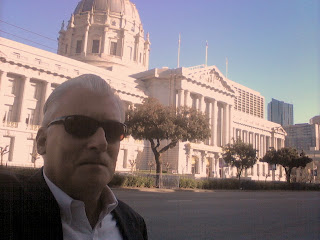 Back at City Hall for round 2 of 3 in the latest skirmish of the EssEff Golf War.

Another good day. Like the Planning Commission last week, the San Francisco Recreation and Parks Commission voted unanimously to finally proceed with the first small step in the Sharp Park Safety Infrastructure Improvements and Habitat Enhancement Plan. This being San Francisco, we're not there yet. The WEBLEEDU's will be appealing the RECPARK decision, which means the next step is before the Board of Supervisors. This is where it gets dicey. We know there are at least a couple of Supervisors on the board who have in the past voted to give away control of this civic treasure to the Feds, and will do so again.

The Supes represent the WEBLEEDU Axis best chance to prevail and no doubt they will send in the "A Team" for a hearing before the board. They didn't do that today. Today we just saw volunteers who responded to a WEI e-mail blast. There was one interesting and unexpected fallout from that strategy - I'll get to that later when I update this post with more verbiage. Stand by...


UPDATE: Watching Julie Lancelle at the dais, I had a sense of deja vu. Checked back on my blog and sure enough - it was December 16, 2009 -  Julie and some of the very same Sharp Park supporters  in the room were offering their support for the Sharp Park habitat improvement plan before the Rec and Park Commission. Then as now, the commission voted unanimously to implement the plan. It was the same fucking plan. Four years later and we are in exactly the place trying to implement a small subset of the same plan which will now be appealed before the Board of Supervisors.

Four years of delay and obstruction from the WEBLEEDUs are stopping the City from implementing needed habitat improvements for the California Red Legged Frog at Sharp Park. In those four year the habitat for the frog continued to degrade.  Laguna Salada and Horse Stable Pond has been a managed habitat since the construction of the golf course made it a viable habitat for the frog decades ago. It needs to be continually managed to permit the frog to continue to flourish there. But the WEBLEEDU Axis is trying to prevent that from happening. That should tell you everything you need to know about the Wild Equity Institute and the Center for Biological Diversity.  They do not have the interest of the Red Legged Frog at heart. For them, the endangered frog and snake are a means to an end.  Their objective is to force the City to give up control of Sharp Park to the Federal Government, they are not willing to accept anything else and they are willing to let the frog habitat at Sharp Park degrade to make that happen. That's fucked up.  That's why we need to continue to fight them.

One more thing - I think they call this the "buried lede"

This happened. A local woman who spoke at last week's planning commission was also present today and spoke before the RECPARK commission. She was brief and basically just hit on some of the e-mailed WEI talking points. She sat back down and listened to the Sharp Park supporters speak. At the end the secretary asked if anyone else wanted to speak during public comment. She raised her hand and indicated she had something else to say.  The secretary told her that she only gets one turn.  I assumed she wanted to rebut some of our comments. I was wrong.

After the meeting a few of us were in the hall discussing the meeting. She walked up to us and said: " I just wanted you to know that I only came here because I am on the WEI mailing list and they said we should come here to speak. After listening I realized that this situation is not at all like what they said. Rec and Park are trying to improve the habitat for the frog. I feel like I was bamboozled."

She was. Hearing her acknowledge that fact was the best thing that happened all day.

Sent from my Sprint HTC smartphone and later updated and reformatted.