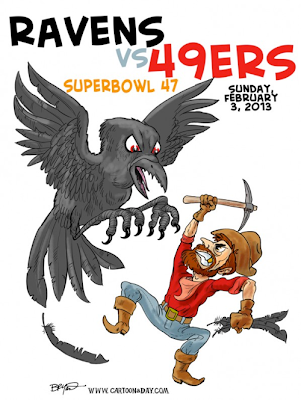 Full Disclosure: I've lived in San Francisco for 30 years. However, as I originally hail from Chicago,  Da Bears, Cubs, Bulls, and Blackhawks will always command my sporting loyalties.  Still, I have made a sincere effort to get behind the local teams as my second choice. They've not made it easy.

Look -  I am enormously grateful to the Niners for knocking the Green Bay Packers out of the playoffs. After the Packers lay down against the Vikings to keep the Bears out of the playoffs, watching Green Bay go to the Superbowl would have been too painful to bear. Since then, I have enthusiastically cheered the Niners throughout the playoffs. But the Superbowl  is another matter. There is a very good case for my fellow City citizens to follow my lead and pull for a Ravens win.

Here the top ten reasons why every San Franciscan should reconsider their support for the Niners:

Even if you like the team, the players, the coach and Kaepernick's tattoos, you still have to put up with Niner fans. Over the years San Francisco 49er fans have been variously described as spoiled, entitled, effete snobs and football ignoramus's.  This is all true. Trust me on this. Even the 49er players hate them. This is what  local hero Randy Cross had to say about Niner fans in 1986:

"Hopefully, our white-wine sipping crowd will decide to get off its collective ass and cheer," the 49ers guard told reporters. "They didn't make much noise Monday night. I thought they had a bunch of cardboard dummies up there." When they made noise, Cross said, it was at the wrong time. "They don't cheer when the other team has the ball," he said. "When we get the ball, they are screaming and hollering so we can't hear the signals in the  huddle." 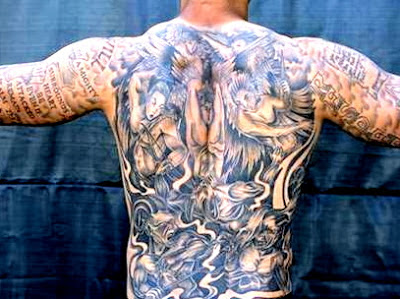 And his biceps. And his back. And his pecs. And... whatever. Your choice.

The Denise DeBartolo and John York era has been an unmitigated disaster for the San Francisco franchise for most of their tenure. It's been 18 years since this once storied franchise made it to the Super Bowl. The York's have made exactly one right decision over that period of time. They hired Stanford Coach and ex-Chicago Bear quarterback Jim Harbaugh as Head Coach. That, as it turns out, was either stroke of genius or an example of a stopped clock accidentally getting it right. In one season Harbaugh took an average .500 team with a journeyman quarterback to the playoffs, and in two seasons he found a championship quarterback who could take them to the Superbowl.  Recall that prior to Harbaugh, the Niner's ownership were near the bottom of every "Worst Owners in the NFL" list. Now they are moving the team out of San Francisco. These owners don't deserve a Superbowl ring.

Or at least -  they won't be in the very near future. San Jose / Santa Clara will soon complete a nifty new stadium for the so-called "Forty Niners". Next year The Team Previously Located in San Francisco will abandon Candlestick Park and move 40 miles away to a larger metropolis. Geographically speaking, even the Oakland Raider home games will be played closer to San Francisco than the supposed "San Francisco" team. Lets get real. San Jose is no more culturally, geographically or aesthetically connected to San Francisco than St. Louis is to Los Angeles. How many people in L.A. are still cheering for the St. Louis Rams? Calling a team located in San Jose a "San Francisco" team makes no more sense than San Franciscans laying claim to a team located in Sacramento, or Cleveland, or Kabul. It is only a matter of time until they adopt their rightful new name - The Silicon Valley Vultures.

5) The Baltimore Ravens are gayer than the San Francisco 49ers

Not that there is anything wrong with that. In fact, with EssEff at the leading edge of gay / lesbian culture and politics it is important for the citizenry of this diverse, tolerant and sexually liberated town to keep our priorities straight. Political correctness trumps sport. Which means that apology or no, San Francisco must leave this behind:

“I don’t do the gay guys man,” said Culliver, whose Niners play the Baltimore Ravens on Sunday. “I don’t do that. No, we don’t got no gay people on the team, they gotta get up out of here if they do. Can’t be with that sweet stuff. Nah…can’t be…in the locker room man. Nah.” 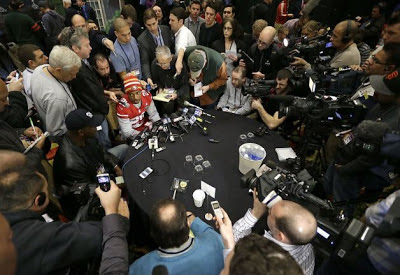 At least the 49er PR department should explain to their players exactly the purpose of the Public Service spots they are shooting.

4) Uphold the Long Standing Primacy of The Eldest Sibling

I am oldest of four in my family, including a two sisters and a brother. There is an important principle at stake in this game that goes beyond mere sport loyalty. If Harbaugh the Younger were to defeat his brother Harbaugh the Elder, it would be an affront to God and Nature. There is a natural order to things. If we do not want to see the universe turned upside down and inside out, the elder, wiser, and better dressed brother should win.

I have this on very good authority - namely Ray Lewis. You just don't want to be on the wrong side of that equation. You know - fires of hell, eternal damnation, lakes of lava, melting flesh - all that. Why take chances? 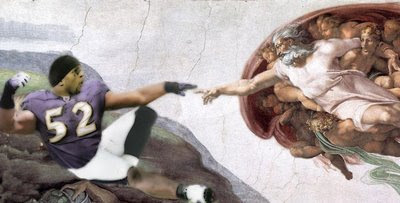 God may not pick winners, but he is apparently taking Baltimore and the points.

We are a liberal city. Make that a very liberal city. Here in the Peoples Republic of San Francisco we are all about fairness, equability, redistribution, and sharing the wealth.  The Giants won the World Series last fall. The San Jose Sharks are undefeated and have a very good chance of taking the Stanley Cup. Even the Golden State Warriors are on a winning streak and only a few games out of first. On top of all that sporting glory winning the Superbowl would be a bit greedy, don't you think? Consider the self-esteem issues confronting every other city should the Niners win. Let's be fair. Let's give some other cities a chance. Let Baltimore win this one. I mean - the people in Baltimore actually have to live there. It's the progressive thing to do.

That was so great! Burning that million dollar Muni bus and all the other fires and broken glass and vandalism.  Way cool! Only problem is that it was kind of expensive. And, despite saddling ourselves with even more taxes in the last election, the City is still broke (see previous point about being most liberal city in the country).  I'm just thinking it might be a little easier on the budget if a few disappointed drunks are all the City's finest have to deal with, as opposed to another full throated civic celebration.

Losing the Superbowl is the fiscally responsible thing to do. Go Ravens!

Ravens win, and the local fishwrap seems disappointed that the celebratory riot has been cancelled:

"But as night fell - and the 49ers fell as well for the first time on football's biggest stage - it became clear there would be no celebratory mayhem this Super Bowl night. A different sort of grim reality gripped the city as the 49ers got behind the Baltimore Ravens within the first five minutes and never pulled ahead. The whoops that had filled the streets deflated to a worried murmur."

Thanks Baltimore Ravens. You saved our bankrupt City a lot of money tonight.
Posted by mw at 10:53 PM

So, shall we take up the Presidio Golf Course on their $49 Super Bowl Sunday greens fee offer today? You've shown me the error of my (eldest brother) San Francisco fan ways, and meditating on a high-scoring round of golf may be the appropriate course of action.

Sounds good, but I am locked into the tube today. I don't think it is legal to not watch 6 hours of prelims before the game. It's certainly not American.

I have been called unpatriotic before, and it's always a pleasure being unAmerican when the weather is as beautiful as it is today,

Maybe I'll see you at the post game riots.