Not So Sweet 16 [candidates for mayor] 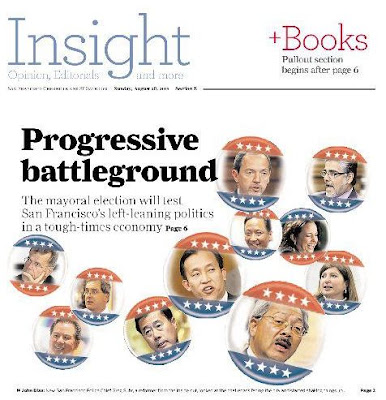 As a direct consequence of our new public financing rules for the mayoral race in San Francisco, we have a cavalry charge of 16 candidates running for mayor. C.W. Nevius explains:

"It would be safe to say that many San Franciscans don't understand public financing...

The weird catch-22 of San Francisco's system is that once the money is spent, a candidate can't drop out of the race unless he or she pays it back. The problem is that a 2007 change in the law made it possible to start pulling in the money nine months before the election. By the time August rolls around, candidates may be hundreds of thousands of dollars in the hole and can't afford to quit."

So we have candidates who are only in the race because we the citizens of SF are paying them to run for mayor with our money. And the peculiarities of our public finance rules mandate they stay in the race in order to continue to suckle at The City's bountiful teat. But this is all fine because - you know - we in SF have a lot of extra money lying around to finance any candidate who wants to run for mayor. Why would we not want to spend $9 million of our tax dollars for the privilege of sorting through sixteen mayoral candidates? I sure can't think of anything better to do with that money.

As Ron Popeil might say - "But that's not all!" At no extra charge we will throw all sixteen candidates into the mix-master of our first ranked voting / instant runoff election for mayor. On November 8th, all San Francisco voters will cast three votes for mayor in rank order of preference. "Rank" being the operative word in that sentence. Rich Deleon ruminates about the election and The City's progressive future in today's Chron Insight:

"San Francisco voters, as usual, have a lot on their plates. On Nov. 8, they will select a new mayor, district attorney and sheriff, and they will decide on eight ballot measures. In the mayoral race, in particular, the burden of choice will be heavier than in most past elections. Voters must choose from a crowded field of 16 candidates, 10 of whom are current or former officeholders and most of whom are serious, well-funded contenders.Under the city's ranked-choice voting system, the voters will need to do more political homework much earlier than in the past, because this election will be a one-day sale without the option of a later runoff election simplifying choice, for good or ill, by whittling the 16 down to two. And as the voters survey the candidates to decide how to rank and vote for up to three, they will also need to consider two rival charter amendments that address the central focus of recent campaign debates, namely, how to control San Francisco's accelerating public pension obligations and rising health care costs to secure the city's financial future."

Who knows what kind of a gawd-awful mess will come out of this election? Recall that in Oakland's 2010 ranked voting mayoral election, candidate Jean Quan had 10 points fewer first choice votes than Perata in the first vote count. I am talking about - Her Honor Jean Quan, the current mayor of Oakland, who had 10 percentage points fewer first choice votes than the loser Don Perata.

The simple fact is that most SF citizens have no friggin' clue about the ramifications of ranked voting/instant runoffs. While the voters may not understand it, be assured the candidates who would otherwise have zero chance of winning a plurality in the election or a majority in a real runoff know how exactly how the voting system can be gamed.

Net net - As a voter it is more important to decide who to exclude from any of your three votes for mayor than it is to pick who you would prefer to see win as your first choice. In fact you may be better off ranking your favorite as your second or third choice. This is Game Theory Gone Wild. We might as well be drawing lots to pick the next mayor.

At this point, all I know for certain about my mayoral vote is that John Avalos will not get any of my three votes. In this blog I have focused primarily on his position on Sharp Park. Obviously that is not the only or even the most important issue facing our city. However, that issue is indicative of a bigger problem with his character and candidacy.

If he is willing to pander to the most radical progressive constituents, to secure their support by denying the unassailable science and documented accounting on our wonderful Sharp Park, and even go so far as to advocate giving away this historically important 100 year old legacy - this gift to the people of San Francisco, then he cannot be trusted with any leadership role in our city government. But with our convoluted crapshoot of an electoral system, and enough second and third place votes, he could very well be our next mayor.

I only regret I have but three votes to not give to John Avalos.

Maybe this is the nature of future SF campaign themes, posters and bumper stickers under this cluster-forked mess. The only message simple enough to distill to a bumper sticker in this system is a message about who to vote against. How about...

Oh, this is fun. My Number One, Two and Three Do Not Vote for choices are:

1. Ed Lee (a complete puppet of Willie Brown, Jr. & Friends, and he doesn't even try to hide it)

2. Michaela Pier-Alioto (dumb AND mean as a snake)

3. Bevan Dufty (as crooked and craven as they come)

mmmm - You are ahead of me. I have not picked my second and third worst choices yet.