When on the family Baraga County forest land in June, we observed a number of large wolf prints in the mud. After reading about this recent sighting, reported by Lon blogging at Phantoms and Monsters, I am wondering now if it was indeed a wolf: 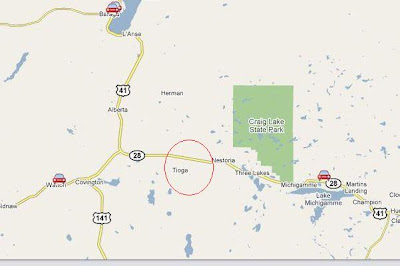 NOTE: the following emails were received yesterday in reference to at least 2 sightings of the supposed 'Michigan Dogman' in Baraga County, Upper Peninsula, Michigan. I have contacted the witness who seems very truthful and credible...Lon

Last fall, my son and I were driving on US-41/M-28 towards Three Lakes in Michigan's Upper Peninsula (where I live). The beast ran across the highway near Tioga Creek. I had not heard of this before reading Phantoms and Monsters, but this is exactly what we saw. We are familiar with all animals living here. Moose regularly cross in front of drivers, so we watch the sides of the roads carefully. We were very puzzled and thought it might be some mutant wolf and could not figure out what we witnessed. It ran fairly fast about 50 feet in front of our truck. It was so strange because the front of it was much higher up than the back, larger than a wolf. Very strange to see it on your website.

NOTE: I contacted the witness and asked for any further detail of the sighting. This is what I received:

It did not look exactly like the video or drawings I saw, but VERY close. The side view shape of the animal was almost like an ape shape, with the front legs longer than the back legs which made it run funny. It ran like a bear runs, with the exception of the back legs being shorter if you can picture that. The front, from the angle I saw, looked like it must of had a wide chest. The head appeared wolf-like, but it definitely was NOT a wolf. The color was brown and black mixed. The hair seemed med-long, like a wolf, and I remember thinking it might of had mange, must of had patches of hair missing.

I was telling my son, who is 13, about what I had found on your site and asked him what he remembered. He gave the same description, how very strange and out of place it was. He said that this spring he saw the same type of thing on a logging road near our house (I do remember him telling me that at that time) and it was the same thing. He was riding his dirt bike (we live in an extremely remote area) and it ran across the trail. I know where he is talking about because I pick berries there and do get a weird feeling like something is watching me. A neighbor told me that area is "Bigfoot Central", which I did not know or believe. But after doing further research today, there are a lot of reports of strange creatures in this area that go back many, many years.

Who knows what it is, but as long as it's not hurting anything, I hope it is left alone. I am very familiar with the wildlife. I do hunt and know my tracks. I have not seen any strange tracks, but now will really keep my eyes open. Please keep me informed if you get any other reports from my area. Rhonda

UPDATE: 21-July-09
Ken the forester responds via e-mail after seeing this post...

Re the wolves out there. A forester friend of mine was going through on a trail in your south 40 and saw a pack of four black wolves. The first one he saw was only about 65 feet away from him. When it turned to go, the other three came off from the side the trail, joined the first one and they all trotted away.

Don't know about your "Dogman". It hasn't made the Marquette Mining Journal to my knowledge. - Ken

Not sure why Ken thinks The Mining Journal is a better source the Lon's blog. Speaking of Lon, he just posted a new, much more graphic version of this Michigan Dogman video. I suspect an internet marketing effort a la "Blair Witch Project" is underway. Watch for a soon to be released Michigan Dogman movie.
Posted by mw at 10:54 AM