Tenerife to Antigua Summary Stats (per Captain Jim FB post):
Miles Traveled: 2,840 Nautical Miles
Miles To Go (to Antigua): 0
15 Days. Downhill all the way.
Average winds 17-25 knots.
No injuries other than one bruised and scraped forearm.
No boat damage other than a trash compactor that stopped working. 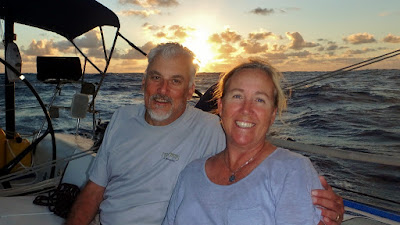 "Land Ho!" said MW upon joining the Kim and Deb coffee klatch at dawn, in the cockpit, while still  about 60 miles out, looking around and pretending to see land. 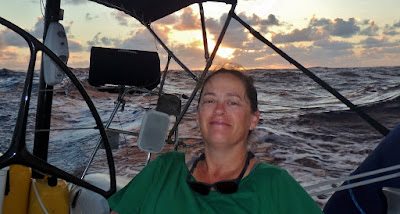 Sailing:
Otto was back in control as we complete the home stretch to Antigua. Humans continued to experiment with Otto configurations, but with winds in comfortable ranges (16-20 knots) and the sails back in our standard downhill unreefed wing and wing configuration, Otto was doing fine. Some humans just wanted to take the wheel in anticipation of getting into Antigua early.

Captain Jim took a poll to revisit the decision of whether we would be mooring tonight with immigration tomorrow or going for the dock and immigration today. The results were decisive: Go easy, get a mooring, swim, and wait until tomorrow for immigration. 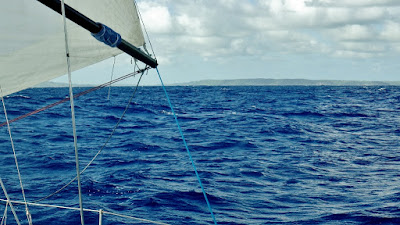 Kim was the first to spot Antigua. Earlier, Doug made a dubious claim of spotting the low-lying Guadaloupe island of La Desirade off our port beam. 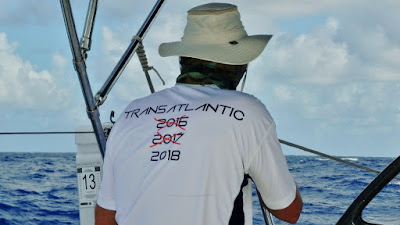 This claim was unsubstantiated. I think he was hallucinating. 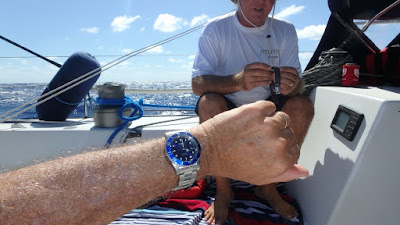 Actual time of landing per our Boat Pool rules, was 3:45 PM  local time which Captain Jim claimed made Kim the winner of the Boat Arrival Pool.* With that, Kim won the Triple Crown of Open Ocean passages - Fastest Drive Time (for a human), First To Spot Land, and Winning the Arrival Time Pool.

Navigating the tricky shoals and reefs surrounding Antigua required the combined efforts of everyone on the crew, including Deb at the Nav station, Kim on the IPad next to Jim at the Helm, Mike and Doug watching buoys and depth. 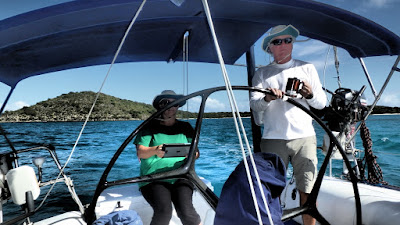 We arrive in Falmouth Harbor during the Antigua Boat Show and one of the most egregious displays of ostentatious wealth any of us have ever seen. Those boats sure are pretty though. 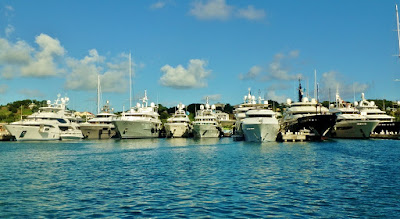 Picked up a mooring, raised the quarantine flag, and went for a swim. 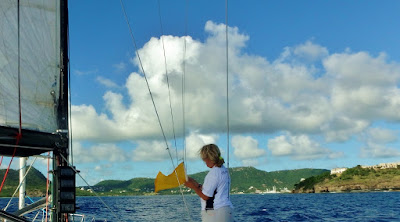 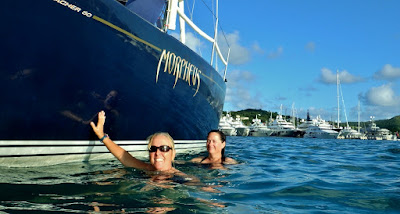 Checked the prop to see if we collected any debris along the way. 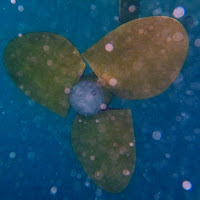 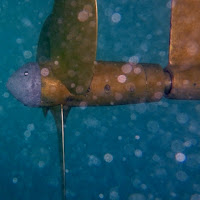 Until we clear Immigration in the morning, we have to stay on the boat. But we have plenty of libations to celebrate. Kim and Deb broiled a giant rib steak served with garlic mashed potatoes and we enjoy a family dinner in the salon. 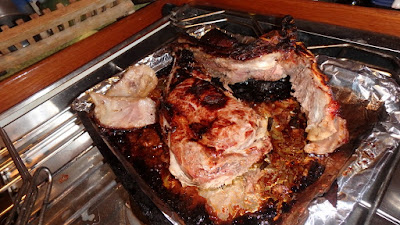 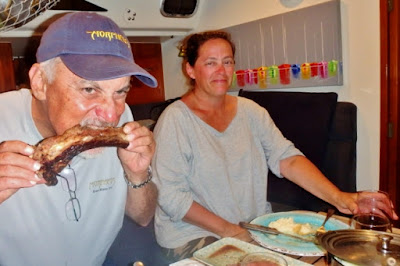 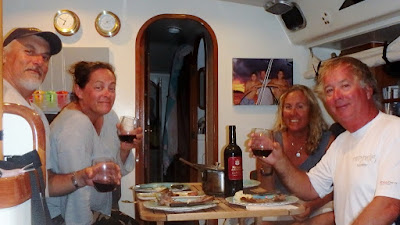 Happy to be here. Sad because the crew will soon disperse.

My intent is to cross-post daily logs to MW Mobile Blog and Jim & Deb's Morpheus Sailing Blog while en-route from SailMail. Due to the technology limitations, these will be short, text only posts. I'll backfill pictures and video once I am home again. Eventually.

PostScripts - This post is the first non "SailMail" post after arrival. There were a lot of complaints from the Reader about the abrupt cutoff of blog posts on Dec 4 without any closure to the story. We are endeavoring to rectify that oversight in post production, starting with this post.

*A protest has been filed with the race committee over disparities in the rules regarding the time zone of record used in the Antigua Arrival Boat Pool Calculation.