Miles Traveled: 2,283
Miles To Go (to Antigua): 400
Heading: 280
Current Speed: 9.6 knots
Fastest Ride so Far [SPECIAL NOTE: Due to conditions and new watch configurations we have segmented this competition into two categories] -
Thought of the Day:
"What we have here is a failure to communicate." - Captain Cool Hand Jim

Sailing:
It had to end sooner or later. During our miraculous extended run with a harmonic convergence of wind, waves and course, everyone was feeling a bit nervous as it seemed too good to be true. There was so much knocking on wood It sounded like a flock of woodpeckers had taken over the Morpheus. My first indication that conditions changed was a deck sweeper wave that washed over the starboard bow, into the cockpit and splashed through the aft hatch and onto my sleeping face. Nothing like a salt shower alarm clock to get your day going.

Earlier this morning the winds and waves came up and we double reefed in the dark before dawn. Otto was not dealing with things as well as Captain Jim would like and by mid-morning the humans had taken over the helm.

Problem being, there are only three humans on board who can safely sail in these conditions, and your loyal blogger is not one of them. So, until conditions return to some semblance of normalcy, Jim, Kim and Doug are taking one hour watches at the helm while Deb and I alternate two hour watches accompanying them on deck, looking for ships, and making sure everything else is cool while they focus on driving the boat. Safety first. I love it when a plan comes together.

Although we're sailing through big swells, and occasionally a big one rearranges seating arrangements, everyone is fine.

EDIT: Please permit a digression as we need to add a little color to that last sentence and also explain why this post is "Catch A Wave ... Redux."

During the Morpheus 2013 Transatlantic passage, when we were 3 days from our final destination, our May 17 post "Catch a wave and you are standing on top of the world" described a large wave that hit the Morpheus at an inopportune moment with the result of "a few inconsequential items took flight."  At the time, we didn't want to worry anyone enroute, but the inconsequential item that took flight was me aka "Ballast". The full story was later documented in the post "Morpheus CSI", where I explain and document the diving maneuver "EmDub with a half-twist" (seen in the diagram on the left) resulting in rotator cuff damage that ultimately was repaired surgically.

Which brings us back to the current log entry -  again three days from our destination we are again surprised by a sneaker wave at an inopportune moment.  As it turns out, the "rearranged seating arrangement" was Doug performing a reverse EmDub dive starting at the Nav table and ending up on the deck in the galley. He was deducted points for degree of difficulty as the maneuver did not include a half-twist. Fortunately, there was also less damage - just a bruise and scrape - no harm - no foul.

We now return you to your original log post.
We have company. "Zed 7 Solo Sailor" is back. She is racing in the Route de Rhum. Last seen two nights ago passing aft while we were watching a movie on the mainsail. Now pulling ahead of us a few miles off our port. 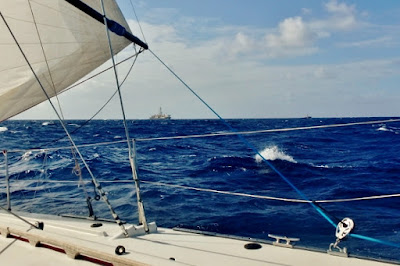 More dramatic, we passed within a mile of the tug Alp Winger towing what looks like a huge derelict derrick ship - CR Luigs. 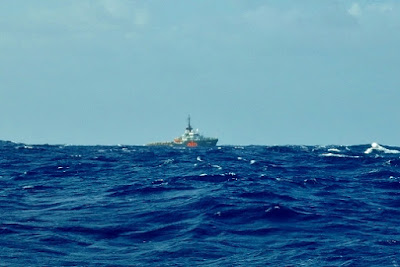 It's an ugly brute. 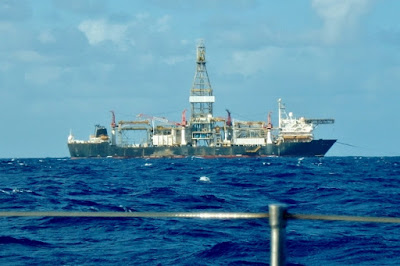 Last three days on the Noon to Noon 24 hour mileage check were 197, 195 and today 222. Getting there quicker than anticipated even as recently as a few days ago.

Fishing:
Are you kidding? Not in these conditions. 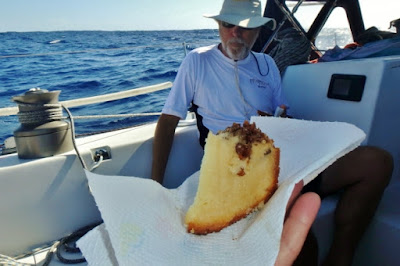 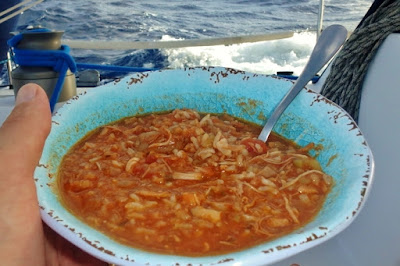 ++++++++
My intent is to cross-post daily logs to MW Mobile Blog and Jim & Deb's Morpheus Sailing Blog while en-route from SailMail. Due to the technology limitations, these will be short, text only posts. I'll backfill pictures and video once I am home again. Eventually.

PostScript - All on-board have an opportunity to add comments here on the bottom of post prior to transmission if they so desire: