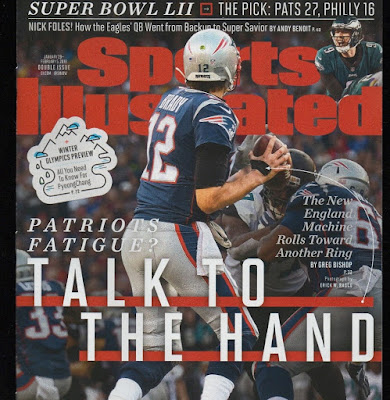 It was the summer of 1999. Pat, a friend from my prior professional life at Oracle corporation, invited me to play a round with him at Green Hills Country Club.  I eagerly jumped at the chance as it's not often I get to play a private Alister Mackenzie golf course. It was the only time he invited me, which is the rule not the exception when I am invited by a member to play a round at their private course. It's always one and done. Probably has something to do with my bad golf game and, I assume, bitter complaints and threats by the other members after I depart.

The starter put us with a another pair to fill the foursome - Green Hills member Thomas Brady Sr, and his son Tom Brady - home from school break at the University of Michigan. It was the summer before his last season at Michigan as the starting quarterback for Wolverines.


Tom is, of course, a natural athlete and a great golfer. I am not. I didn't spend a lot of time in conversation with my playing partners because, as per usual, I spent much of the round consumed by the on-going horror of my game.  I don't think I was much worse of a golfer then than I am now, but I was certainly not better.  The golf itself was unremarkable and the scores are lost to the dustbins of history. I probably shot something in the 115 range, which would be typical for me on a course of that quality. But I digress.

Tom took pity on my game. He was friendly, offering encouragement and sympathy as I hacked my way around the course. I was not a huge college football fan at the time, but had a general appreciation of who he was and Michigan's ranking as a good but probably not great team in the coming season. Late in the round I realized I was being unsociable and decided I needed to at least feign interest in this likable young man and his college football career. This is what I said, thinking I was offering an encouraging and optimistic assessment of his team's prospects for the coming year: "Michigan is pretty good. They could finish in the top ten in the rankings this year."

Tom's demeanor instantly changed. His face went cold. He stared at me like I was a bug crawling on a hamburger. He was actually pissed. Finally, in an icy measured tone, he said:

If you're not playing for a championship, there's no point in playing."

Okay then. I remember thinking at the time - This is the most competitive SOB I will ever meet.

And that's why I am taking the Patriots and laying the points. Pats 33 - Eagles 24

Postscript: University of Michigan 1999 Season
Posted by mw at 12:56 PM