The headline in the 11-22-2017 Pacifica Tribune last week tells the story: "Sharp Park sea wall OK'd". I'd link to the story itself, but either they have not posted it on-line or I can't figure out how to find it. The article is a good summary of the recent California Coastal Commission decision granting a permit to the City of San Francisco to maintain and improve the Sharp Park sea wall. Some excerpts:

"The California Coastal Commission, recognizing the importance of the Sharp Park Sea Wall in protecting both Pacifica's historic golf course and the adjacent neighborhoods, has approved a permit to preserve and maintain the structure, including it's rip-rap armoring...

Commission Chair Dayna Bochco... asked Commission staff what would be the likelihood of the surrounding neighborhoods being flooded without the protection of the sea wall. District Director Dan Carl said, "It's a 100 percent certainty if the berm wasn't there... you would open up a whole new can of worms with respect to Highway One and the residential neighborhoods surrounding the golf course"...

The sea wall created a fresh-water habitat in the Laguna Salada and surrounding wetlands which are now home to two species protected under the EPA."

For anyone with a lick of common sense, this seemed an obvious outcome. You need only to look at what the Sharp Park sea wall protects: 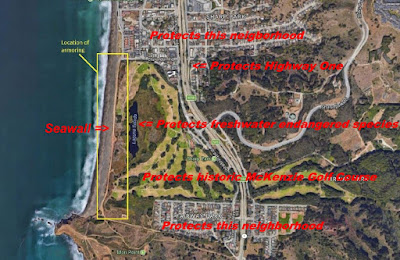 The choice is simple - either maintain the sea wall, or play Russian roulette every winter waiting for an El Nino bullet to:
The Coastal Commission decision was made, but San Francisco Rec & Park repair and reinforcing work of the sea wall is yet to begin. The consequences of a breach would be devastating to the community, endangered species, and Pacifica civic fiscal fortunes. To borrow a phrase: Winter is Coming.

We got lucky last year. The Pacific storm bullets are loaded in the chamber and the cylinder is spinning. Any Pacificans in favor of sea wall work starting before old man winter pulls the trigger might want to attend the Monday November 27 Pacifica City Council meeting and comment on Item 11:

It should be an easy decision - right?  Well, it should've been an easy decision for the Coastal Commission, yet 3 of the 12 Commissioners argued against granting the permit. The Pacifica City Council should send a strong, clear message to San Francisco stessing the importance and urgency of maintaining the berm now.

This is not a hypothetical concern. We know what will happen if  the sea wall is breached. We know because it happened before. The smaller un-reinforced berm that preceded the existing structure was over-topped by the 1982-83 El Nino storms. We know the population of endangered California Red-Legged frogs living in the managed fresh water Laguna Salada habitat was devastated by the berm failure. In a "My Turn" letter published in the same Pacifica Tribune edition cited earlier, Pacifica resident Robine Runneals explains exactly what happened to neighborhoods in this excerpt: 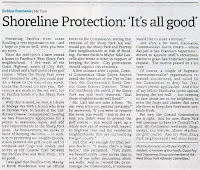 "Since the mid-1970's I have owned a home in Pacifica's West Sharp Park neighborhood. I live west of the Coast Highway, south of City Hall, and a block and a north of the golf course. When the Sharp Park levee wall breached in 1983, you could paddle a kayak to the foot of my street. Linda Mar flooded too that year. References are made to the sea wall, but to Pacifica locals it's the Sharp Park levee.

With this in mind, on Nov. 8 I drove to Bodega Bay with a friend who lives in Fairway Park, to testify at the California Coastal Commission's hearing on San Francisco's application for a permit to maintain, repair, and add trail improvements to the Sharp Park levee. As homeowners we spoke in favor of keeping the levee -- in addition to protecting our neighborhoods, it also protects the golf and its wetlands and frogs and snakes, and serves the Coastal Trail between the Pacifica Pier and Mori Point. It's all good."

I also attended the California Coastal Commission November 8 meeting in Bodega Bay to speak in favor of the seawall permit approval.  Supporters included the San Francisco Public Golf Alliance, other Pacifica residents, and community advocates.  Among them, Paul Slavin:


"I’m a resident of Fairway Park in Pacifica, which is adjacent to the Sharp Park golf course.  The golf course and hundreds of my neighbors have been protected for decades by the embankment guarding the western side of the golf course.  The anti-golf extremists for years have objected to the maintenance of the levee in the hopes that the deterioration of the berm would result in the destruction of the golf course.  If that happens, the Fairway Park neighborhood would also face destruction.  The extremists contended some years ago that smaller dikes or levees, placed closer to the residences, would provide protection.  But while they would like to see the existing embankment begin deteriorating right now, and have advocated for its removal for years, no plans have been made for the replacement dikes.  No research, no engineering, no funding, no real thought about that.  It looks to me like the Republicans’ plan to replace Obamacare, which was never actually a real plan.  The loss of the levee at Sharp Park and the sea wall to the north would be devastating to Pacifica.  I urge the Commission to support the strengthening, the armoring, and the regular maintenance of whatever structure is necessary to protect our community.”

In my humble opinion, this permit approval was even more important for Sharp Park than the SF Board of Supervisors Natural Resource Plan approval last spring.  At the hearing for the resulting permit approval commissioners learned why any notion of "managed retreat" permitting the erosion of the berm/seawall is unrealistic, would invite catastrophic devastation and is simply not feasible. This was confirmed by Coastal Commission District Director Dan Carl as noted in the Pacifica Tribune article at the top of the page (100% probability of the neighborhoods flooding without the sea wall), as well reports by the staff of San Francisco Recreation and Park Department who are responsible for maintaining the Sea Wall.


"Managed retreat was one of the alternatives that was looked at under the six alternatives that we provided in the analysis to the Coastal Commission.  And we found managed retreat at this time to be infeasible for several reasons – both the cost it would take to move the golf course and the habitat and the amenities and I mean even the residential areas that might be at risk – inland, would be enormous.  Additionally, as discussed earlier, moving the endangered species habitat raises a variety of issues related to whether you can even do that... "

Net.. net ...  This was an extremely positive outcome. 30+ years of screwed up permitting for the sea wall by the City of San Francisco was cleared away in a stroke. A solid pragmatic vote by the Coastal Commission confirmed that San Francisco must continue to maintain and improve the existing sea wall to protect the course, habitat, and neighborhoods.  The common sense decision to maintain the seawall is set for the foreseeable future. We just need the work to get done sooner rather than later.

I attended the Pacifica City Council meeting and said my peace, as did a number of Pacifica residents and advocates for common sense. I wanted the Council to see the first two minutes of this video with  highlights from the Sharp Park sea wall Coastal Commission hearing.  Unfortunately, computer display facilities were not available, so I'll post it here:

The entire video is about 15 minutes and features the issues highlighted in this post: Commissioner Bochco saying she opposes sea walls in general, but supports a sea wall like Sharp Park protecting habitat and structures; SF RecPark's Potter stating the sea wall is necessary to protect the endangered species habitat, discussing the staff analysis of alternatives like "managed retreat" and finding it insane (my words not his - he used "infeasible");  Commissioner and progressive SF Supervisor Peskin stating that we cannot ignore the existing assets protected by the Sharp Park seawall; Commissioner Groome outlining the cultural and fiscal importance of the golf course and park to the city of Pacifica; Residents of Sharp Park and Fairway Park pleading for protection of their neighborhoods. 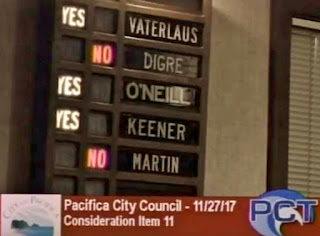 The City of Pacifica will be on the record with a letter to leadership in the City of San Francisco expressing the need and urgency to begin work on long deferred Sharp Park sea wall maintenance before the winter storms.

Common sense and rational practicality carried the day by a narrow 3-2 vote.

But... Pacificans - you still have two votes that just don't have any concern or see any urgency about the possibility of winter storms breaching the Sharp Park sea wall. So there's that.