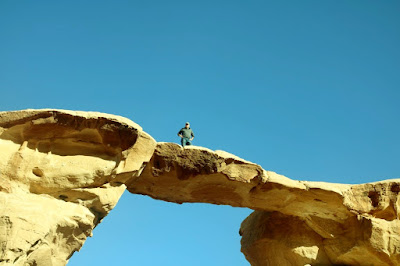 
"After breakfast proceed to Beida, also known as little Petra and the place where the Nabateans used to entertain their guests. Continue south to the enchanting desert of Wadi Rum, Jordan's largest desert and one of the most spectacular desert landscapes in the world. 4 hour Jeep Tour inside the Wadi until sunset. Watch the most beautiful view while drinking a cup of traditional Bedouin tea. Transfer to the campsite inside the desert. Dinner and overnight at camp." 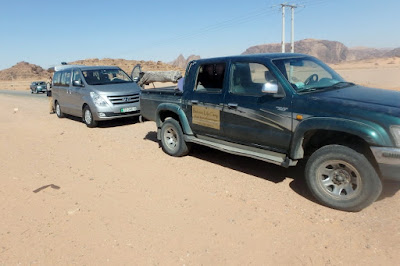 Journal:
We toured "Little Petra" a few days previous, which freed our itinerary for a couple extra hours of sleep before the 3 hour drive to Wadi Rum. Since our tour began this day has been a question mark. We are scheduled to spend a night in a Bedouin camp in Wadi Rum. We knew we would have a cold desert night in an unheated "tent", but since the beginning of the trip temperatures have been even colder than expected.  We were looking at temperatures in the 38 degree range overnight and considered cancelling, but, "In for a penny, in for a pound". 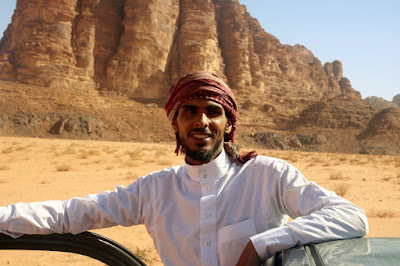 We met Salem (Salaam?), our Bedouin camp host, on a stretch of desert road and transferred into his Toyota pickup for the run to the camp founded by his father Obied.

There are a number of "Bedouin Camps" servicing large tour groups just outside of the Wadi Rum protected area. Sigrid selected Obiend Bedouin Life Camp, as it is a smaller camp, located on the site of the original Bedouin family that runs it today and is grandfathered inside the UNESCO site.

No view from this room. We'll need the thick brightly patterned wool blankets covering the walls, floor and ceiling to protect us from the wind, sand and cold.

After unloading our bags and familiarizing ourselves with the camp and room, we are off with Salaam riding benches in the bed of his Toyota pickup truck for a four hour desert tour. This is the very land walked by T.E. Lawrence and the Arab army that defeated the occupying Ottoman Turks in 1918. It is also where portions of the 1962 David Lean epic Lawrence of Arabia was filmed, including the scene where Peter O'Toole models his new robes and in the next scene where Anthony Quinn announces "It is my pleasure that you dine with me in Wadi Rum!" :


The site also served as a location for Mars in the recent science fiction hit "The Martian". It is an awe-inspiring landscape, and we're glad we did not miss it. Some pics from the day: 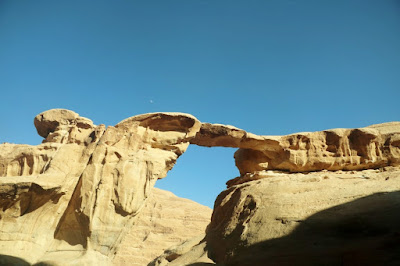 How can I refuse?

We learn T.E. Lawrence and the Arab revolt leadership did regularly encamp near this spectacular siq - a narrow crevice splitting monumental vertical cliffs on either side. 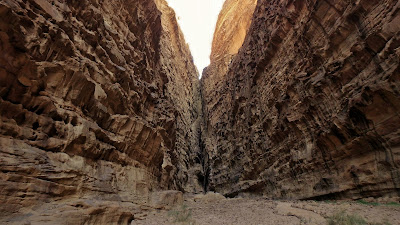 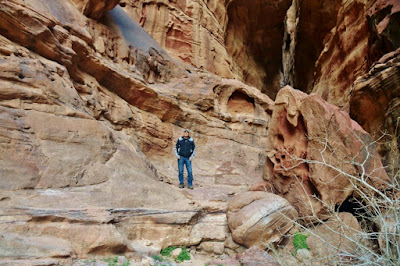 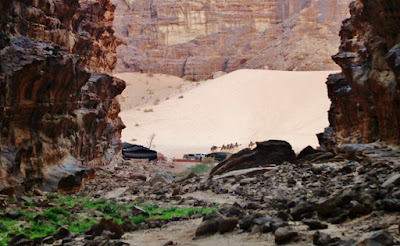 Again words fail me. This time I'll instead invoke the words of T.E. Lawrence himself, from his memoir "Seven Pillars of Wisdom" describing their approach in to Wadi Rumm:

"Day was still young as we rode between two great pikes of sandstone to the foot of a long, soft slope poured down from the domed hills in front of us. It was tamarisk-covered: the beginning of the Valley of Rumm, they said. We looked up on the left to a long wall of rock, sheering in like a thousand-foot wave towards the middle of the valley; whose other arc, to the right, was an opposing line of steep, red broken hills. We rode up the slope, crashing our way through the brittle undergrowth. As we went, the brushwood grouped itself into thickets whose massed leaves took on a stronger tint of green the purer for their contrasted setting in plots of open sand of a cheerful delicate pink.

The ascent became gentle, till the valley was a confined tilted plain. The hills on the right grew taller and sharper, a fair counterpart of the other side which straightened itself to one massive rampart of redness. They drew together until only two miles divided them: and then, towering gradually till their parallel parapets must have been a thousand feet above us, ran forward in an avenue for miles. They were not unbroken walls of rock, but were built sectionally, in crags like gigantic buildings, along the two sides of their street. Deep alleys, fifty feet across, divided the crags, whose plans were smoothed by the weather into huge apses and bays, and enriched with surface fretting and fracture, like design. Caverns high up on the precipice were round like windows: others near the foot gaped like doors. Dark stains ran down the shadowed front for hundreds of feet, like accidents of use.

The cliffs were striated vertically, in their granular rock; whose main order stood on two hundred feet of broken stone deeper in colour and harder in texture. This plinth did not, like the sandstone, hang in folds like cloth; but chipped itself into loose courses of scree, horizontal as the footings of a wall. The crags were capped in nests of domes, less hotly red than the body of the hill; rather grey and shallow. They gave the finishing semblance of Byzantine architecture to this irresistible place: this processional way greater than imagination. The Arab armies would have been lost in the length and breadth of it, and within the walls a squadron of aeroplanes could have wheeled in formation. Our little caravan grew self-conscious, and fell dead quiet, afraid and ashamed to flaunt its smallness in the presence of the stupendous hills." - T.E. Lawrence

Sigrid and I finish the day sitting on the red rocks and watching the sun set behind the mountains. 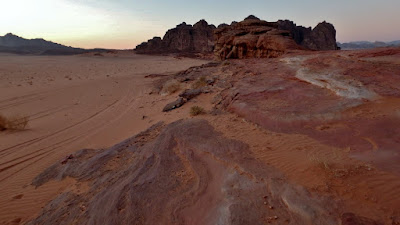 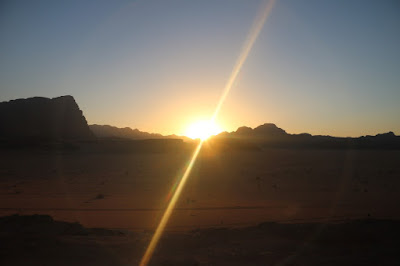 Finally, back to camp where Salem's cousin has been preparing a barbecue in coals under the sand. We return in time to see the meal unearthed, and retire to the dining tent for a fine repast. 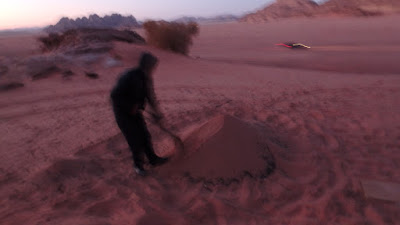 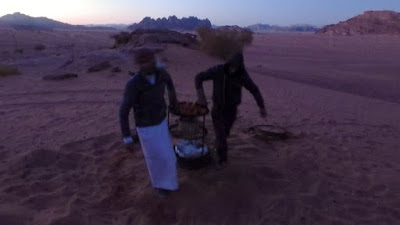 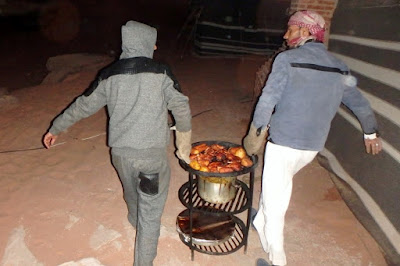 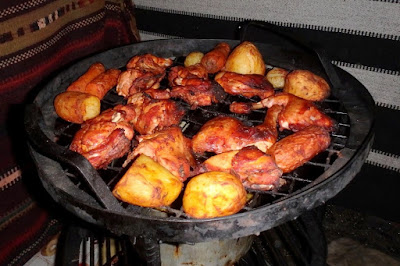 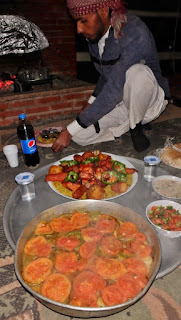 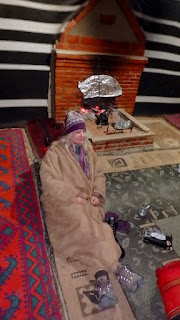 Sigrid brought her down coat on this trip specifically for this night, but we left it in the Alaa's car. Salaam lent her this traditional wrap a long coat call a farwaa (I think). 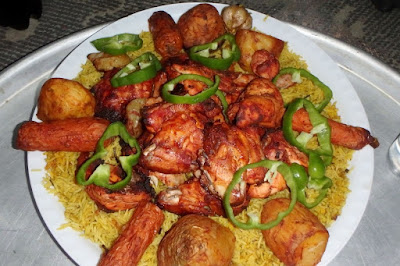 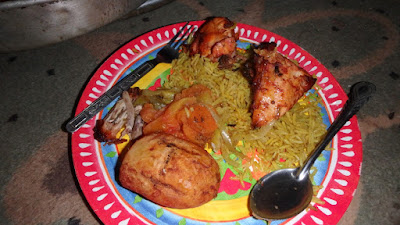 Food was great. After dinner we are in our tent/room and in bed by 8 since there is nothing else to do when the sun goes down and it's 39 degrees in an unheated Bedouin camp. The bed is warm, because they've provided so many heavy wool blankets that it is actually weighs on our breathing. The blankets don't help when we have to make the 50 yard walk though the sand to toilets.

Sleep is not great, and I'm awake at 2 AM  to discover 3 amazing things. 1) My SIM card found a cell signal 2) Google Maps can actually identify the exact location where we are sleeping in the camp and 3) I can find pirate Twitter Periscope SuperBowl feeds. 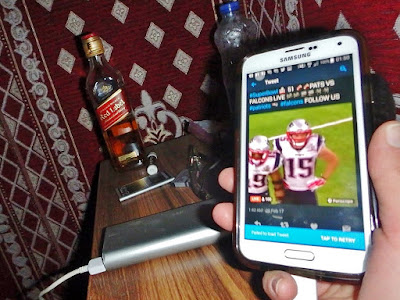 Fading in and out of of sleep buried under the covers in the cold, finding and losing periscope feeds at some ungodly hour, it was the beginning of the 4th quarter, with the the Pats down by 3 touchdowns that I decided the game was over and shut off the phone. Wake up to find I missed the greatest comeback of all time. An epic finish to an epic day. 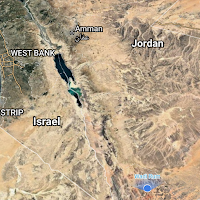 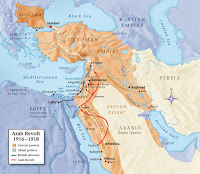