The best thing I can say is that a three airport day is not as bad as a four airport day.  I think we calculated 28 hours of total travel time from our hotel in Amman to the front door in San Francisco. The flight leaves at 2:00 AM.  Alaa got us to the airport at 11:00.  Lots of security in Amman. Bags checked going into the terminal,  again at the security checkpoint with manual checks of carry-ons for both of us, and randomly checked again at the gate. They confiscated my nail clipper.

We flew Lufthansa from Amman to Frankfurt. After about a six hour layover in Frankfurt, we flew United to SFO.  We paid for a ticket, but  used points and fees to upgrade to Business Class.

We learned that Business Class in a Lufthansa A320 is exactly the same seating as coach, except they don't put anyone in the middle seat. There is almost no recline. It was only about a four hour flight, but we'll avoid Lufthansa in the future.

The Lounge in Frankfurt is comfortable with all the amenities. I was pulled at the gate and taken down the hall at the airport for an extra security check while Sigrid boarded. I don't know why. 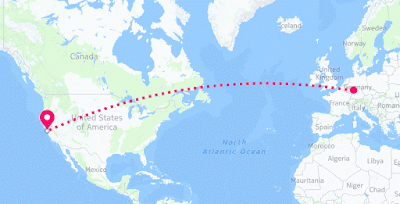 The 11 hours on United was in the upper deck of a 747 with full recline seat pods. Much better. I watched two movies. Dr. Strange and I forgot the other one. EDIT: I remembered! I also watched the Ben Hur remake - a truly forgettable film. What were they thinking?

At SFO the Customs agent wanted to know why we had so many bags, but waved us through. These long hauls are not fun, but the price you pay for any great travel adventure. Glad to be home.
Posted by mw at 8:25 PM