For friends, family and the random search engine visitor. This blog started as an experiment in mobile blogging from my Palm TREO 600 700 Prē HTC Evo,Samsung 5. Now it serves as a simple repository of favorite activities. Expect bad golf, good fishing, great sailing, eating, drinking, adventure travel, occasional politics and anything else I find interesting along the way including, but not limited to, any of the labels listed here... 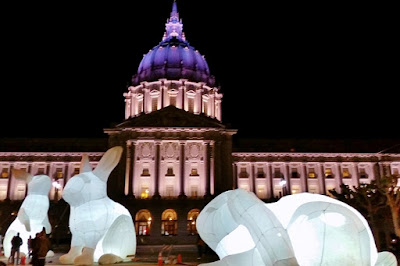 After exercising our civic responsibilities at a "Meet & Greet" with San Francisco City Supervisor Scott Wiener, we were stopped cold at the Civic Center by the sight of giant bunnies in front of City Hall. More on that later. But first a word about Scott ...

In addition to being a SF Supervisor, Scott Wiener is a candidate for State Senate.  He received national attention last year and became a local political hero after chastising a Fox News reporter that was chasing him down at City Hall.

@Scott_Wiener We need common sense on @SFBOS. You're as close as we get in #EssEff & this'll burnish ur Progressive bona fides w voters.
— The Dividist (@Dividist) July 15, 2015


Yes I am supporting him, even though he is a Liberal Democrat, which does not necessarily align with my political views. However, in the pantheon of San Francisco politics, as exemplified by the Board of Supervisors, the political spectrum runs from Liberal Democrat on the right, to Radical Progressives in the center and Maoists on left.

Scott takes on the tough issues, applies a liberal dose of common sense, and is not a fiscal illiterate like many of our other Supes. He is a technocrat with a detailed command of the issues facing the City, and he is a supporter of my pet issue in San Francisco. Finally, he is tall. Very, very tall. He is the tallest guy in City Hall, and he will be the tallest State Senator in Sacramento. So there is that.

Back to the Civic Center... 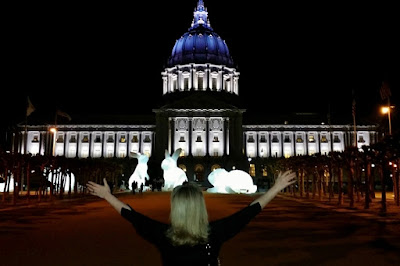 Apparently the name of the installation is "Intrude" and the artist is Amanda Parer.

"Five gigantic rabbits hopped into San Francisco's Civic Center Plaza on Monday, and they've got a 24-hour security guard watching over them. After vandals repeatedly tampered with Super Bowl 50 signs on display around the city in February, it was decided around-the-clock supervision was necessary, CBS San Francisco reports.

The 23-foot-tall inflated nylon art pieces glow from the inside at night. The large-scale public art installation Intrude was designed by Amanda Parer, an Australian artist living in Tanzania, and will be on display through April 25."

How can you not stop and take pictures of a 23 foot tall illuminated inflatable rabbits? Fortunately, I had a model with me for the photoshoot: 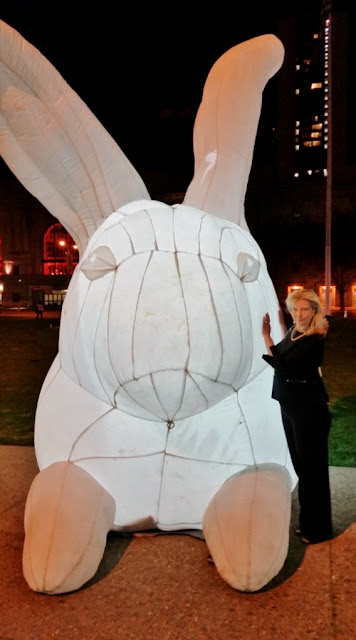