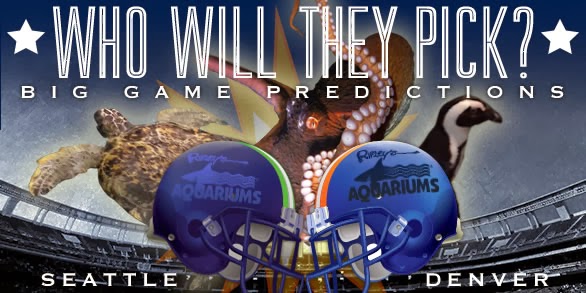 An octopus, sea turtle, and penguin pick the winner of the Super Bowl. Sound's like the setup for a joke, but I don't have a punch line.  Just me adding my pick to the menagerie.

The critters are all going for Denver, the pundits are split, and EA calls it for Denver in OT:


You've got to be a little dubious about the EA pick since they didn't even get the weather right.

Since all Americans are required to go on the record and make a Superbowl pick (even those who do not know which teams are playing), I'll use the blog to get my prognostications on the record.

ATTENTION: THIS POST HAS BEEN REDACTED BY THE NSA FOR REASONS OF NATIONAL SECURITY. TRUST US, YOU DON'T WANT TO READ THIS! REALLY. WE MEAN  IT.... NO FLY LIST... CAVITY SEARCHES... THINK ABOUT IT.

I don't have an emotional investment in either team... well... I'll admit to being sympathetic to the old fart (Peyton Manning) and my Alma Mater is in Colorado, so I do have a mild preference for the Broncos - but that will not affect my objective analysis. It seems like most prognosticators are calling a close game. I don't see it.

Yeah, Seattle has the #1 defense and "defense wins championships" yadda... yadda... yadda... but you can throw the Seahawk's defensive statistics out the window when they are not playing in Seattle. Their home field advantage distorts the statistics. The offense for opposing teams playing in Seattle are completely disrupted by the "12th man". They can't hear their own quarterback. Opposing coaches must come up with different & restricted game plans to accommodate the noise.  It makes the Seahawk defense look better statistically than they really are.  Seattle won't have that edge against Denver in New Jersey against Peyton Manning.

Peyton Manning is the best there ever was as a field general reading and reacting to defenses. Nobody can do what he does on the field. This Seattle D has not played against anything like a Peyton Manning offense firing on all cylinders. They're not ready for this.

Russell Wilson is a very talented young quarterback but he has never played with Superbowl pressure. It's very rare for a first or second year quarterback to win the Superbowl - think Colin Kaepernick last year. It takes being there to learn how to deal with it. I don't expect Wilson to play to form outside of Seattle and under this pressure.

Although in recent years we've enjoyed several close and exciting Superbowl games, that has been the exception and not the rule. Generally Superbowl games are blowouts. The game will return to form on Sunday. Denver in a blowout.

It won't be as close as the score indicates. I'm giving Seattle an additional meaningless late game touchdown to get to 21.

If you are betting, take Denver and lay off 10 or more points to improve the payout.

If I am wrong I will delete this post and deny it ever existed.

Despite the good work of the NSA in redacting the hacked predictions found in this post, there were consequences: 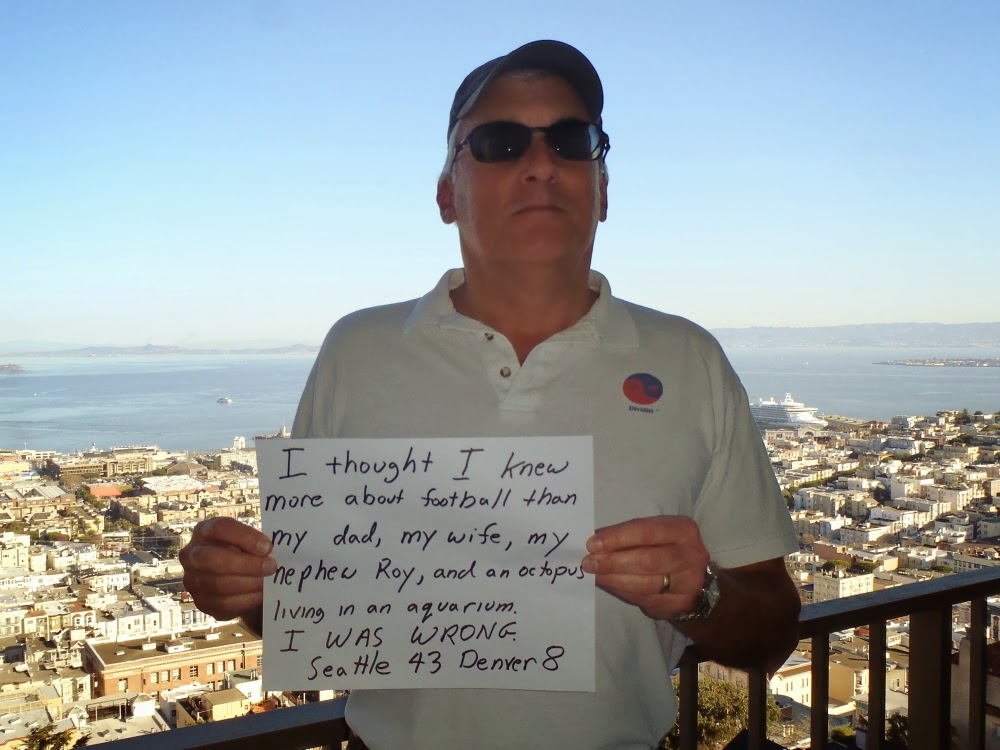 You might want to consider looking for that delete button, though it's probably too late. I've taken a screenshot.

Apparently my blog was hacked by cyber terrorists who know absolutely nothing about American football. Thank you NSA for stepping in to stop them. They hate us for our freedom and football.

I'm only relieved the sorry ass Broncos stiffened up at the end and prevented Seattle from scoring twice more, which would have meant at least a tie for the biggest Super Bowl blowout ever. That record is still held by Montana and the 49ers, 55-10 over, who else, Denver.