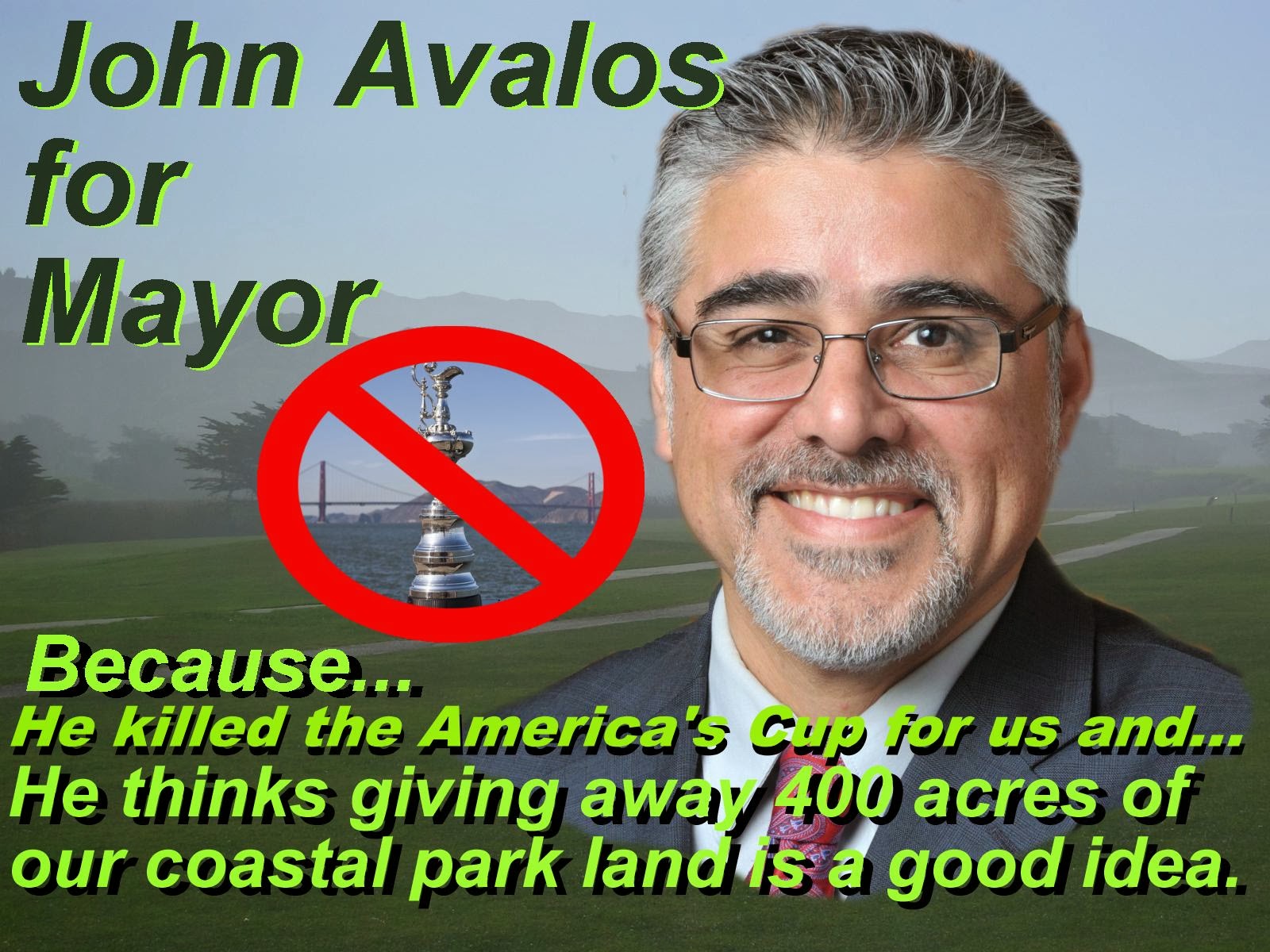 We'll come back to the graphic at the top of this post later. First a column by C.W. Nevius in the Chronicle:

S.F., Ellison can't let game of chicken sink America's Cup
"The city insists it's just holding the line on costs. The Oracle group counters that there are several other locations that would be just as attractive as San Francisco Bay.  Nonsense. Last summer's event may have been a bit of a slow build, but once we got done with the one-boat "races" and New Zealand versus Oracle got under way, it was a rip-roaring success. Russell Coutts, head of the Oracle team, called the finals "the best ever." Why mess with that? You'll be astonished to hear that the reasons involve money, politics and hefty egos." 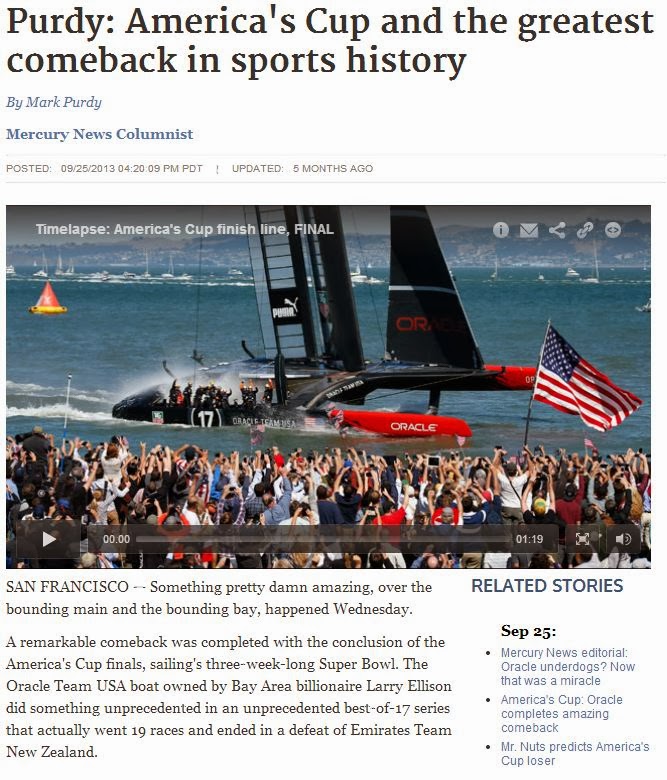 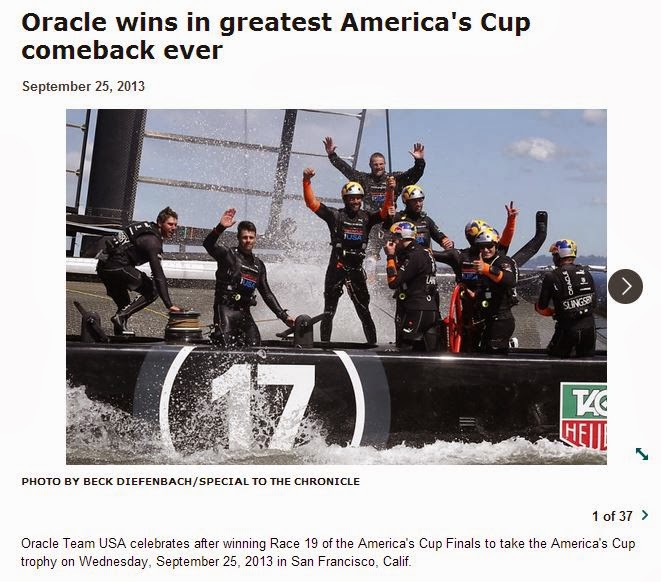 Oracle takes America's Cup in comeback for the ages
No oracle could have foreseen this. Oracle Team USA completed its miracle comeback Wednesday and retained the America's Cup in a regatta that carved a place in the San Francisco pantheon of unforgettable sporting events. Twice down by seven wins, Larry Ellison's team rallied to win 9-8 in a 19-day marathon that was the longest final series in the Cup's 162- year history. And probably the most thrilling. The final race of the 34th America's Cup brought three more lead changes to a series that was full of them, but skipper Jimmy Spithill's catamaran simply had too much speed for Emirates Team New Zealand and won by 44 seconds. A roaring, flag-waving crowd greeted the crew after its eighth straight win. It secured each one knowing that a single mistake could mean the Cup was lost. Ellison hopped on board and told his sailors, "Do you guys know what you just did? You won the America's Cup!"

Just great. So of course we are going to fuck it up. As much fun as it was to have the Cup here and as much sense as it makes to keep it here, I don't see it happening. We've got too many ideologues on our Board of Supervisors pandering to the far left to expect rational, practical, common sense decisions that are good for the City. Exhibit A - Supervisor John Avalos. Yeah, the same guy who wants to give away San Francisco's Sharp Park to the feds. He opposed it the last time and he'll fight it the next time.

As an indicator of just how screwed up our local politics can get, I've no doubt he'll brag about opposing and killing the America's Cup being hosted in San Francisco when he runs for mayor again, as he inevitably will. Why should Larry Ellison put up with this when there are other venues begging to host the event? He owns an island in Hawaii for Pete's sake. Why wouldn't he run the regatta off his island to the finacial benefit of his vassals who live there, people who would love to have the event there, in a state that would kill for this event and BTW would also benefit him financially by promoting his island? That's what I would do. That's what any sensible billionaire would do.

But I am not a billionaire, so I do what any non-billionaire would do - initiate a series of  rants, cries, lamentations, figurative rending of garments and literal gnashing of teeth across all the social media at my disposal. Which turns out to be a lot.  Best if we just summarize what happens next with storify:


So there you have it. For anyone who does not make it all the way through the storify slide show, this is how my twitter conversation with Supervisor Avalos ends:


Still, I've got to hand it to Avalos. I'll never see eye to eye with him on policy. In fact, I'm pretty sure that he and I will never be in the same time zone as far as politics and policy are concerned. And I am sure he would be a complete disaster for the City if we are so foolish as to elect him mayor. But...

That said, it's rare for a politicians at any level to engage with constituents on twitter as John Avalos does. It's retail, grassroots, personal politics at its best. The exchange gave me a greater appreciation for the role of social media in general and twitter in particular as the modern upgraded "handshake" of politics. And it gave me an appreciation for the John Avalos style of direct one-on-one politics via social media. It's also kind of frightening if you don't agree with his politics. It's hard not to like someone who will engage with you directly as Avalos does on twitter. And people vote for people they like. And it does not take a lot of votes to win elected office in San Francisco.

I am not immune to this personal touch in politics. I feel really bad that I called him a jerk in the first tweet in this thread. John Avalos is not a jerk. He's just completely absolutely wrong about everything.

That about wraps up the day. Except as I was writing this I got one more tweet from Supervisor Avalos:

I told you Avalos was personally a great guy, even though he doesn't remotely understand the Sharp Park issue. Nevius, on the other hand, is a pompous, lying jerk who writes anything his bosses tell him to.