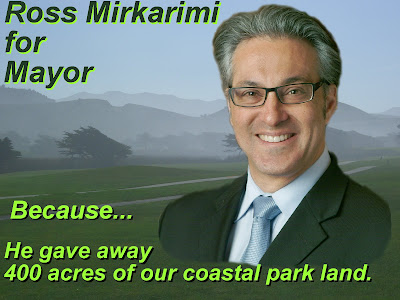 To be fair, he hasn't given anything away yet. I am just working up some ideas, should Mirkarimi decide to run for mayor as some expect.

Some context - I have been blogging about the Sharp Park Golf course controversy for a number of months. For reference, the full thread on this blog is linked here, a background post here, good overviews in the San Francisco Chronicle here and here.

In a nutshell - Last year, the Center for Biological Diversity (CBD) wrote a letter threatening to sue the city of San Francisco alleging golf operations at Sharp Park were harming two endangered species. In March of '09, Supervisor Ross Mirkarimi sponsored a resolution to study alternative solutions to the problem, including keeping, destroying or modifying the course. The recently released report was approved by the SF Park & Rec Commission. It recommends continuing the course operations, with modifications to enhance the habitat for the endangered species. The CBD and their allies continue to advocate a different course of action. They want the City to destroy the golf course and give the land away to the National Park Service, specifically the Golden Gate National Recreation Area (GGNRA). Supervisor Mirkarimi, while non-committal, seems sympathetic to that plan.

Which brings me to this exchange between Mirkarimi and me during the public comment portion of the San Francisco Government Audit and Oversight Committee (2 minute excerpt from the SFGTV recording of the 4 hour meeting):

Ok. So, as my time ran out Supervisor Mirkarimi slapped me down pretty hard. That is fine. This was his committee and his venue, and he gets the last word.

But this is my blog, and I get the last word here.

Now I know that this will come across as a "Damn, I wish I said that..." post, long after the moment has passed. It will come across like that because... that is exactly what I am doing. While I was loaded for bear on Sharp Park minutiae, I was ignorant of the history of Crissy Field and the GGNRA as I stood in front of Supervisor Mirkarimi.

I am less ignorant now. So how about a little "compare and contrast" between Crissy Field and Sharp Park?

Crissy Field was an airfield, built on landfill, that since 1915 was Part of the Presidio Army Base. Congress decided to close the base in 1989, and it was turned over to the National Park Service in 1994. It never belonged to the City of San Francisco. The 100 acre Crissy Field site was considered a hazardous waste dump, and over 87,000 tons of hazardous material had to be hauled away before the process of restoring the site could proceed. The Golden Gate National Parks Conservancy (a public private partnership), did an extraordinary job raising the tens of millions of dollars needed to restore the site during the tech bubble of the late nineties. In partnership with the National Park Service, the 100 acre site was restored for the recreational use of all, including a relatively small 20 acre tidal marshland. It is now administered by the Golden Gate National Recreation Area (GGNRA). As I suggested in my comments to Supervisor Mirkarimi, all involved did an excellent job with Crissy Field, converting 100 acres of federal land that was a hazardous waste dump into federal land that is now a wonderful park. Kudos.

In 1917, the 400+ acres of land near Pacifica known as Sharp Park was bequeathed to the City and County of San Francisco by the Murphey family. The deed specified the land be used exclusively for park and recreational purposes for the benefit of all. The golf course, comprising about 80 acres of that land, was designed and built by Alister MacKenzie, the world's most important golf course architect and opened in 1931. The park was landscaped by John McLaren, the godfather of San Francisco parks, including Golden Gate Park (which is also administered by SF Rec & Parks, not the GGNRA). The park and the golf course are important historical landmarks by any standard. It is historically important to the city of San Francisco, the city of Pacifica and to the golf world in general. Over the years, millions of people have enjoyed the course, the archery range, the rifle range, the hiking trails and and the beach that comprise the park land. Today, over 54,000 rounds per year from Sharp Park help subsidize the overhead costs for the San Francisco Park and Recreation Department as well as other city services and jobs. The park is a unique gem that was a gift to the people of San Francisco, belongs to the people of San Francisco, and is a legacy for future generations of San Franciscans. Unless Supervisor Markarimi succceeds in giving it away.

Sharp Park was a 400 acre oceanfront gift to the people of San Francisco. The park is home to an historic landmark golf course by the game's greatest architect, is enjoyed by hundreds of thousands of people every year, and helps subsidize overhead costs for the SF Rec & Park Department operations.

I think it is safe to say they are different.

So once again Supervisor Mirkarimi, I ask you - Do you want this to be your legacy? Do you want your footnote in San Francisco history to be this: "He was the man who gave away 400 acres of coastal park land that belonged to the people of San Francisco."

When Supe Mirkarimi mentioned Crissy Field, something didn't smell right. I had a feeling it was not a valid comparison. Too bad you didn't have the federal land info to fire back at him at the time. Keep after him, and thanks.
RZ

Yeah, but in the blogosphere, there is no "last word". Even a lightly traffic'ed blog like this gets indexed by the search engines.

One of these days, Mirkarimi is going to announce for mayor. When he does, people are going to start googling "Mirkarimi for mayor" on the intertubes, and this graphic is going to show up. Maybe it will mean nothing because he has come to his senses on this issue. Or maybe he will learn that giving away 400 acres of park land that belongs to the people of San Francisco, is not the best way to become the mayor of San Francisco.

The closer you look at Mirkarimi, the worse he and his brand of "progressive" politics looks. Let's make sure he never becomes Mayor of San Francisco---or even sheriff.
http://district5diary.blogspot.com/2008/10/case-against-supervisor-mirkarimi.html

Rob,
You can include me in the ABM (Anybody But Mirkarimi) camp.