The following report was shamelessly ripped from nephew Brian's blog and copied and backposted here in total, in order to preserve the status of MW Mobile Blog as the Official Blog of Record for Escanaba Pail Ale. The Brian report:

EPA: Bottle 13 and Unknown
I apologize for this post being a long time in coming. EPA Bottle 13 and Andrew's Bottle (# is unknown) were consumed on the twenty-third night of January 2010. It was Andrew's going away party. For those of you who don't know, Andrew was leaving for basic training on January 27th. Andrew and I had decided that we would start the night off by drinking a beer that had been made with our own sweat, labor, and intellect: Escanaba Pail Ale. 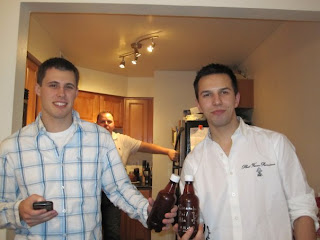 The Beer is cold and we are ready 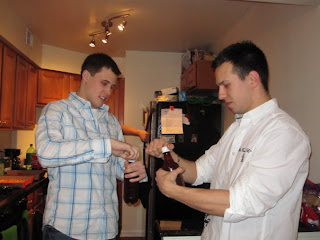 We are a little nervous at this point due to the amount of sediment that can be seen floating around in the bottles. Others at the party are suggesting this may not be a good idea... 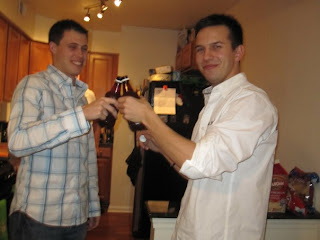 What do they know. We made it, soo it must be safe....Bottles raised, we toasted to a good night, a safe journey for Andrew, and for Andrew to make an acquaintance with a camel preferably female for his sake. 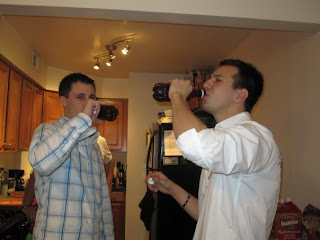 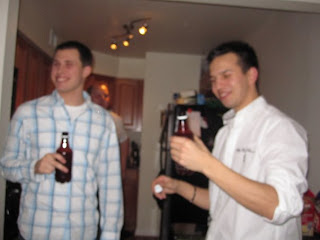 It was delicious!!!
The rest of the night couldn't have gone any better. Andrew made it safely to Fort Jackson in South Carolina. The army did not turn him away for having any strange toxins in his blood. Its been over a month since the tasting and we both are alive and well. I hope everyone enjoys EPA just as mush as we did. Looking forward to the next brewing. Hopefully we will have a better supervisor who has more faith in us next time. Or I get promoted to supervisor because of my excellent work record and the current supervisor has to experience what it is to be like a common laborer. It will help him to become a better supervisor one day.

A couple of thoughts. One - as I explained to both Brian and Andrew, Escanaba Pail Ale is a bottle conditioned brew. This means the final fermentation took place in the bottle and the sediment is normal - even desirable. Two - neither of these guys has any idea about how to drink a bottle conditioned beer,. The proper method is to pour the brew off the sediment into a glass, where the bouquet, color, head and taste can be properly appreciated. I blame myself. I had no idea that my supervisory responsibilities would still be required to help them actually drink the beer.

Still, an excellent report and perfect occasion for an EPA.

Good luck and godspeed to Andrew in his service to our country.
Posted by mw at 10:23 PM

We actually only took our first few sips out of the bottle. After that we poured the beer into a glass.

as far as taste...I just remember it was smooth and i didnt even notice all the sediment floating aroung in the beer. It did not taste bitter, and i enjoyed the taste of it. thats bout all i got on the taste.