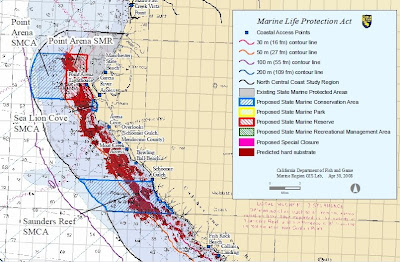 Peter Fimrite, Wyatt Buchanan,
SF Chronicle Staff Writers
Thursday, August 6, 2009"The salty folks who like to hook rockfish, harvest kelp and dive for abalone will have to steer clear of several spots between Half Moon Bay and Mendocino County after a decision Wednesday by the state Fish and Game Commission to protect 85 square miles of California's ocean, including some of its most pristine habitat. The network of newly formed state marine reserves is part of a California initiative that conservationists say is the most ambitious coastal marine protection program in the world. It includes a permanent ban on fishing within 3 miles of the coast in selected areas where populations of rockfish, northern red abalone, seabirds, sea lions and other marine mammals live.

The network, approved by a 3-2 vote, will include Point Arena in Mendocino County, Bodega Head, Point Reyes, the Fitzgerald Marine Reserve near Half Moon Bay and the Farallon Islands. In those areas, restrictions on fishing and other activities like spearfishing would extend into the ocean for 3 miles.

The regulations come in the shadow of a collapse of the salmon fishery and a two-year ban on ocean fishing of chinook, but the regulations do not address salmon habitat. The plan is to resuscitate flagging populations of rockfish, a complex of bottom-dwelling fish that was once a mainstay of the state's commercial and sport fisheries.

Environmentalists insist that the reserves will also protect crucial habitat for everything from sea slugs to gray whales. In all, 22 areas will have some level of protection. Thirteen sites will be fully protected, covering 11 percent of state coastal waters between Half Moon Bay and Mendocino County. That means fishing and destruction of wildlife and habitat would be strictly prohibited in those areas."

11% of the Central California Coast is now protected marine reserve.

If I am reading the map right, my favorite abalone cove is not affected.

My take - On balance this a good thing, as some action needed to be taken to protect the fisheries. My limited understanding of the science is that this approach is sound. Large blocks of protected reserves are the best way to manage a healthy marine ecosystem.

There are problems - the political process of determining exact locations and rules governing these reserves was seriously flawed. Some small local commercial fishing operations on the coast will be decimated. I think this could have been managed with more consideration for these fishing operations as well as being less onerous to recreational fisherman and kelp harvesters.

The worst aspect of this plan - it is virtually unenforceable as constituted. The Department of Fish and Game is already understaffed, has no chance of getting additional funding from our bankrupt state, and no ability to provide enforcement for these reserves in a meaningful way.

As usual with government programs of this scope, it is the unintended and unanticipated consequences that always seems to bite us in the ass. We'll see how this goes. For now, I am cautiously optimistic.
Posted by mw at 10:39 PM