A night in The City 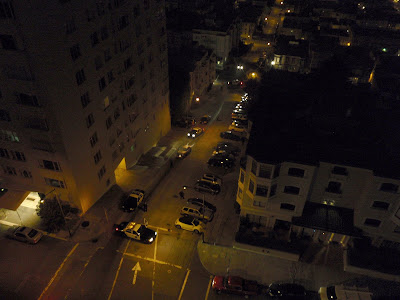 So this was unusual.

This happened 12:45 AM this morning. I was asleep or almost asleep when startled by the sound of a loud crash on the street below our high rise apartment. Out on the terrace I saw this car by itself on the other side of Jones halfway between Green and Union. This is the steepest part of Jones Street. The car appeared to be partially on the curb. Not sure how it got there or what it hit (but we have a theory*). Four or five people were getting out or milling about the car. One was lying in the road complaining about his back. They noticed that there was a small fire under the engine and got away from the car, including the person lying on the road. I called 911, but by the time I got through the cops had already arrived. The fire soon engulfed the hood of the car. 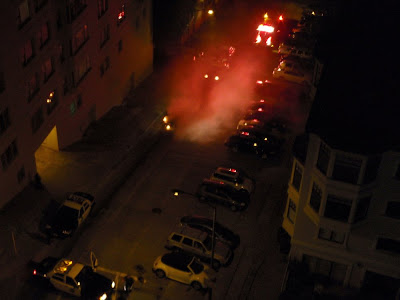 I grabbed my Olmypus 1030SW camera and took these pictures and video clips.

The firemen had it out in a few minutes. 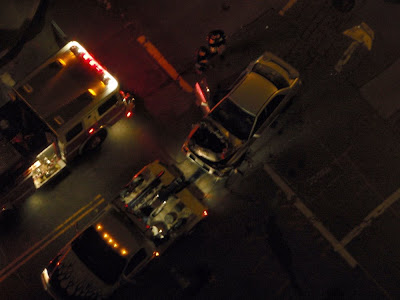 I could see the fire burned through the hood when when they towed it away. I went back to bed not knowing what happened. Looked but couldn't find anything on the intertubes today. Just an odd episode in The City. I hope no one was hurt.

UPDATED:
*Apparently some among the younger set have decided it is cool to take the crest of hills in SF at speed, catching air if they go fast enough across a steep crest. Check out here, here, here and here. I'm guessing these idiots took the hill fast enough to pancake the bottom of their car, ripping it up and starting the fire. That's why the guy was complaining about his back, and there did not appear to be any other cars involved. Dangerous as hell. We are going to try and get some city and police attention on this intersection.

Email ThisBlogThis!Share to TwitterShare to FacebookShare to Pinterest
Labels: fire, From the Terrace, San Francisco, things that make you go hmmm

In some towns a sports championship is required for scenes like this. Although, were a SF team to win such a title (unlikely as it seems), I think it would look much like what you've recorded since, being tasteful, discreet and, well, Californian, the local rioters would set only one car ablaze as a symbolic capitulation to cultural conventions.

I think you got it. This was apparently a riot by the entire fan base of the Arena Football League, which folded earlier in the day.