We may have to track a couple of these spots down during the fall trip... 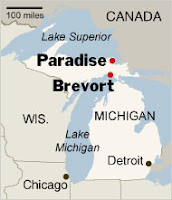 IN the time it takes most people to finish a cup of coffee, Tom Ryan Brown has cleaned, gutted and placed a whole whitefish in a barrel of brine, where it will rest for hours before it is stacked in a smoking shed outside.

A day later, that whitefish is for sale in the refrigerator case at The Fish House, a tiny restaurant and store in this one-stoplight town in the Upper Peninsula of Michigan.

Mr. Brown is the third generation to work for a company founded by his grandfather, Tom Brown Sr., and now run by his father, Tom Brown Jr., known as Buddy. Each day, father and son smoke about 125 pounds of fish, caught just minutes away in Lake Superior.

Some of the smoked fish ends up in a tangy spread created by Cathy Brown, Tom Ryan Brown’s sister and the restaurant’s waitress. Other fresh fillets make up the “Lake Superior Fish Dinners” advertised by the neon sign in the cafe’s window.

The Browns are part of a small but vigorous family-dominated industry in the Upper Peninsula, where everyone, local and visitor alike, seems to have their favorite place for smoked fish.

Some favor Gustafson’s of Brevort, arguably the best-known source.

Others favor King’s in Naubinway, where they catch and smoke their own fish, while those farther west on the Keweenaw Peninsula swear by the fish from Peterson’s in Hancock.

“Smoked fish is in every camp and cabin in the woods,” said Nathan Mileski, the executive chef at Northern Michigan University in Marquette.

While smoked fish is available year-round, as long as it is safe for boats ply to ply the northern Great Lakes, business is at its peak in August, when waters abound with the summer’s first coho salmon, the fattest whitefish and flavorful lake trout.

After tourists go south after Labor Day, hunters arrive on the two-lane roads in this region where Ernest Hemingway once fished. Everyone, it seems, brakes for smoked fish, and if you can’t find it, you aren’t looking...

Not everyone is a fan, however.

“It’s cat food,” said Jeannie Rose, the owner of Jeannie’s Reach Cafe, which sits across from Gustafson’s in Brevort.

It’s true that the smoked fish made in the Upper Peninsula has little to do with the thinly sliced, silken kind sold by Zabar’s or served at Petrossian. While both are cured, the higher-end variety is cold-smoked (generally at a temperature of about 80 degrees) and sometimes not cooked at all....

if you are going to check out smoked fish along lake superior one of your 1st stops should be THE FISH HOUSE in Munising. probably the closest stop from Shag lake.
At the fish house in Munising. Our ship wreck tour guide recommended them. No restaurant just Just the fish house and the man who does the smoking of the fish lives next door. This was the first year he did not run his own business. we bought smoked fish sausage.$8 a pound. I insisted on trying it since I love smoked fish. My family tried it and everyone liked it. Especially because...Just think about it...Smoked fish without the bones! If you are ever in Munising you must stop off at the fish house to try the sausage.

while you are there try Muldoons pasties -we didnt try the beef but the chicken and veggie pasties were excellent. Again carry out only.
Robyn

Fish House and Muldoons are on my list. Thanks.