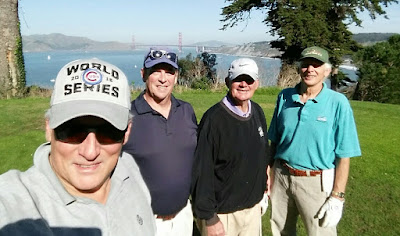 On my doctor's orders I am at my safe space in Lincoln Park playing golf to take my mind off of... well... you know.  I don't want to repeat that trigger word here. No live blogging today due to my fragile mental state. 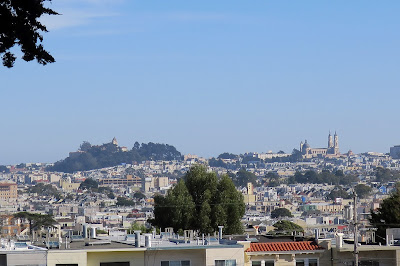 Playing with Stuart, Rick, and Bob. Beautiful day. Early fog has burned off and we are now enjoying warm temps, sunshine, and little wind... it couldn't be nicer. Stuart is contributing photos, partially relieving me of the burden documenting the round. Will update with photos after the round. 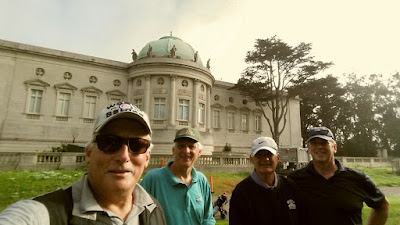 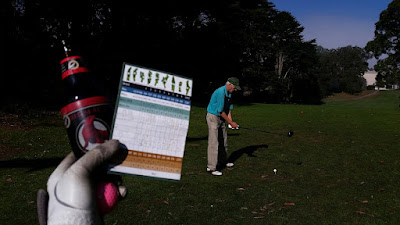 A great day, except for the fact that Rick "Trumped" me on the front nine. At the turn:

The election result is affecting my game more than I anticipated.  I was reminded that I've frequently asserted that I would give up the game if Rick beats me. He's playing out of his mind with four pars on the front. I'm playing badly. At this point in the day I began to realize this could be the end of me golf career. On the 10th tee I was determined to fight back.

Believe it or not this corkscrew follow-through resulted in a great drive and a par. Alas it was not enough... 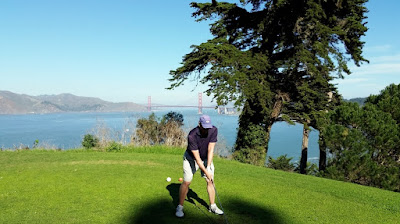 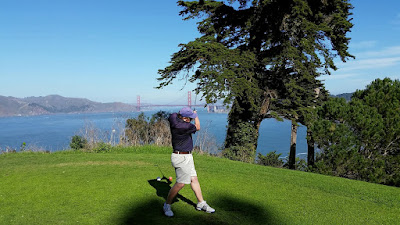 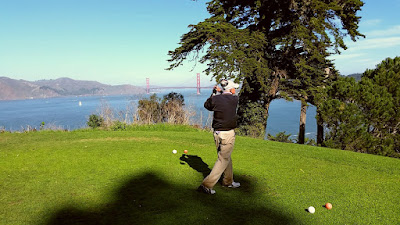 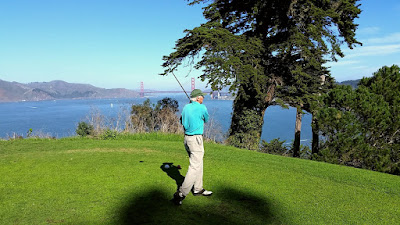 I guess I must disclose the final results. 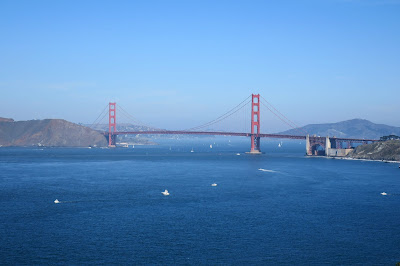 I've decided that it would be wrong for me to give up the game based on this single round. It was not my fault. Clearly the blame for my surprising under-performance lies elsewhere. I blame James Comey, the FBI, Vladimir Putin, WikiLeaks, Julian Assange, Jill Stein, Gary Johnson, Bernie Sanders supporters, the New York Times, Washington Post, Mainstream Media, John Podesta, Facebook, Mark Zuckerberg, Twitter, Millennials, Boomers, Donna Brazille, Debby Wasserman-Schultz, Bill Clinton, the Clinton Foundation, House Republicans, the DNC and the low information, racist, sexist voters representing 50% of America.

I don't blame Hillary though. Not her fault.

Agreed that it's not Hillary's fault. She was playing the shifty hand she was dealt and by the rules as she understood them. Unfortunately, she is not a great leader; otherwise she would have kicked Donald's butt. She would have made a passable president.

Agreed that it's not Hillary's fault. She was playing the shifty hand she was dealt and by the rules as she understood them. Unfortunately, she is not a great leader; otherwise she would have kicked Donald's butt. She would have made a passable president.

I think she had the potential to be a great President. She has the skills, the brains, the temperament and the proven ability to work with her peers in Congress. Unfortunately she is the worst candidate in the history of the universe. Democrats should have understood this fact. If she was even moderately competent as a candidate, she would have easily defeated Barack Obama in 2008. It's not enough to have the resume to be president - you have to be a competent candidate.