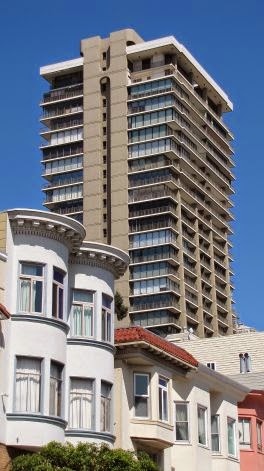 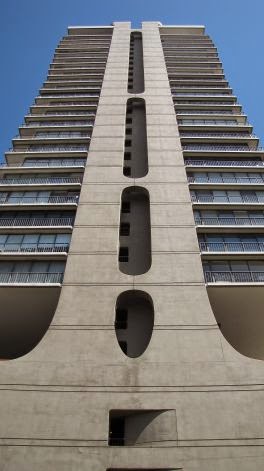 Our building merited a feature in the Sunday Chron from architectural critic John King. This from a recurring series highlighting buildings and architecture that King finds worthy of note.

We've been living here over 20 years, and over that time the tone of local architectural critics (amateur and pro alike) has softened considerably. I recall a column from the late great San Francisco columnist Heb Caen where he referred to The Summit as a "beast of building". Even now, John King seems a bit conflicted, simultaneously describing the building as "serene", sculptural" and "intrusive". Make up your mind John.

A High-rise Classic in an Awkward Locale

Urban buildings exist in two realms, the heavens and the earth, and Russian Hill's tallest tower shows the potential tension well. Developer Joseph Eichler wanted to stack views upon views, and he did so with a flared shaft of concrete and glass at once sculptural and serene. But the impression down low is blunt, the historic setting serving as little more than a launch pad. Now the hill has a 40-foot height limit, leaving Eichler's aerie on its own - still intrusive, but letting us admire the architectural drama without fearing what might come next.

Of course, the best way to view our building is from the inside looking out.

"Of course, the best way to view our building is from the inside looking out" should probably best be vocalized by Dame Edna as she adds, "you poor peasants on the sidewalk."

At least you know that no other buildings will block your view.