Something about this day brings out my lyrical side. With apologies to Alfred Lord Tennyson:

Okay. So it doesn't actually rhyme unless you mispronounce abalone. Deal with it.

It's that time of year. The opening of the abalone season is upon on us. But it doesn't look like anyone in their right mind will be doing any abalone diving today. 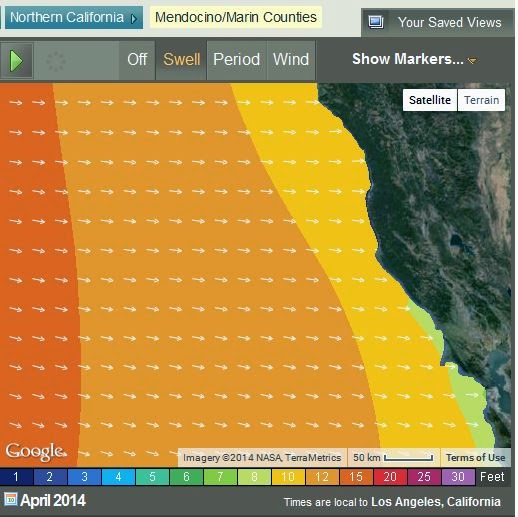 Pacific Waverider has a 12 foot northern swell and a 5 foot southern swell. 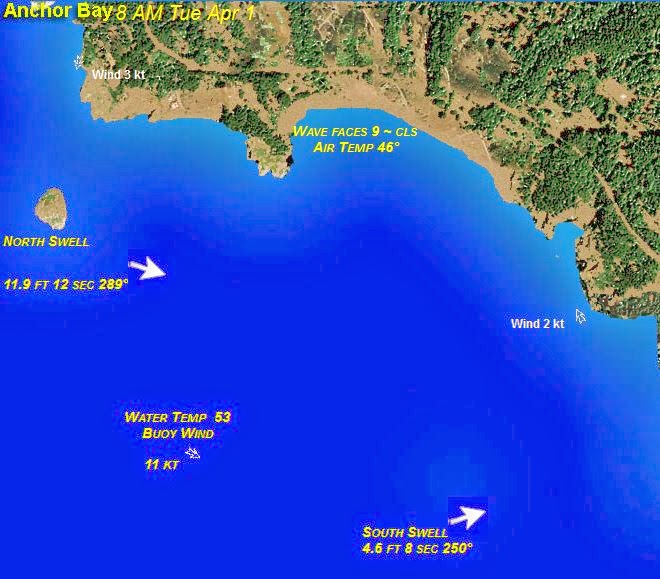 Which tells me my favorite cove is pretty much a zero visibility washing machine. This year's opening is looking more like 2012 or 2011 than last year's benign conditions.  The forecast through the weekend does not look much better.  I'll be waiting for conditions more amenable to my advanced age before venturing in, and hope any divers that risk it manage to stay safe this week.

A good time to get out the DFW guide and brush up on the New Rules:

"Abalone divers are in for a shock this year, likely more uncomfortable than the first surge of cold ocean water inside a wetsuit. In the wake of an unprecedented abalone die-off in 2011, new regulations for the 2014 season have curbed the annual catch limit and closed the North Coast's most popular abalone dive site at Fort Ross State Park...

The previous annual limit was 24. The daily catch limit remains at three abalone, along with the minimum size of seven inches. Also new for the season opening April 1 is an 8 a.m. start time, nearly three hours later in midsummer than the previous start time of half an hour before sunrise.

“It's a little too much over-regulation,” said Ben Dougherty, co-owner of a Bodega surf shop who described himself as an “occasional” ab diver. Dougherty said he expected some reaction to the die-off and acknowledged that it takes a long time — biologists say up to a dozen years — for abalone to grow seven-inch shells. “It's a touchy topic,” he said. But the annual limit of nine from Sonoma County waters seems “a little too strict.”...

Biologists were initially stumped by the die-off, which stunned local divers and was erroneously attributed to a red tide. The cause has since been identified as a bloom of microscopic algae called Gonyaulax membranacea, which produce a toxin called yessotoxin that was found in abalone gut tissue. No similar algae bloom has occurred since 2011, Rogers-Bennett said."

If there is a problem with abalone population, it almost certainly has more to do with poaching than sport abalone hunters. That said,  I don't really take issue with the new rules. It is such a great sport, and there is such a limited geography where the Red Abalone thrives, that it is important to protect the fishery. And if the DFW is erring on the side of caution with rules that are easier to enforce, I'm good with that.

I've also learned it is even more important to turn in your abalone report card now. All the years I've been doing this I never failed to turn it in until last year. I lost mine (gotta be in a file somewhere), failed to report, and now I am in the system with a Bad Reporting Demerit. Don't be that guy.
Posted by mw at 11:30 AM

Bad Reporting Demerit? Shame on you, and also for using "it's" in the third line of your abalone poem rather than "its" without the apostrophe. As for "abalone" being pronounced like "Abilene," hey, why not? You're an artist.

And I was rhyming with "cone" not "sheen".