We are underway at City Hall. It's going to be a long one. 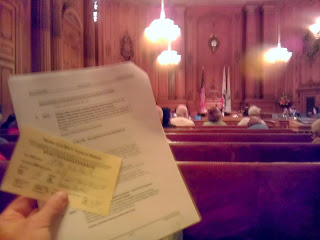 In City Hall, at the Board of Supervisor's meeting for a hearing on the WEI appeal of  The Sharp Park Pumphouse, Safety, Infrastructure and Habitat Improvement Project. We are  number 19 on the agenda. The WEBLEEDU's get first crack with public comment in front of the Supes, and they are out in force today. We'll be here a while.

The amount of  misinformation, distortions and outright falsehoods being promulgated right now is truly awesome!
In short, the usual tripe from the carpetbagging ex-CBD attorney's sincere but misinformed mini-me minions.

Despite a scheduling structure clearly intended to minimize the impact from supporters of the course, we had a great turnout. People who love the course really hung in there.


During Public comment, everyone got 2 minutes at the podium. I was working from notes and presented a single slide:

"Good Afternoon Supervisors. I am a 30 year resident of San Francisco, live on Russian Hill, an enthusiastic but bad golfer and a frequent patron of the San Francisco municipal golf courses,   I am here in support of the Sharp Park, Safety, Infrastructure Improvement, and Habitat Enhancement Project.  I've closely followed the Sharp Park controversy over the last five years and want to share some of my observations.

One of the things I've learned during this controversy is what the best science tell us. Net Net – the California Red Legged frog is doing absolutely fine coexisting with the course.  I don't have time to read these expert quotes that summarize  the status of the frog habitat at Sharp Park so  I'll post them here and have copies for any interested.

We've had golf course operations at Sharp Park for 80 years. The golf course created the fresh water habitat at Laguna Salada for the California Red Legged Frog to thrive. It is a managed habitat, and it is our collective responsibility as stewards of the park to continue to manage and improve it for the frog and snake. This plan does exactly that. Any delays risk the frog habitat.

On the one hand  - you have practical problem solving environmentalists like the dedicated and hard working employees of San Francisco Rec & Park who have the best interest of the Sharp Park wildlife at heart. They just want to start moving ahead with the plan to implement required improvements in the habitat.

I urge the board to not be distracted by the self-serving claims of the WEI Lawyers. Lets move forward and start the process which will improve the managed habitat for the frog and snake at Sharp Park, and incidentally also for golfers.  Thank you."

I had to speak quickly to get all that out in two minutes. I think I managed to get my points across and still remain vaguely coherent.

The questioning of Rec and Park employees about the plan by some of the Supervisors was truly embarrassing ( I am looking at you David Campos).  Campos is literally reading from spoon fed Wild Equity Institute e-mails without any understanding of what he is reading or what the real issues are. He is also essentially calling the Rec and Park employees liars, in order to make the case for a guy who sued the City, lost, and then demanded the City pay his $550 / hour legal fees for suing the City in a losing cause.

This is a political process in front of an unpredictable San Francisco Board of Supervisors, so no telling how the vote will go.

It's been over four hours. Will probably update tomorrow with the vote if we can hold out that long.

UPDATE: The vote was 7-4 in favor of the Sharp Park Project and against the WEBLEEDU appeal to stop it. A big win. Coverage of the vote linked here.

Way to stick it out, Citizen Wallach

Hmmm. Upon further review, decided that was a poor choice of words. Edited the post to say "hung in there".