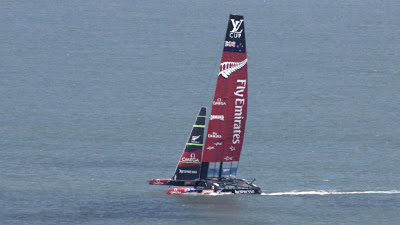 It's been a long time coming, but America's Cup racing finally got  underway on San Francisco Bay. We have been anticipating this ever since it was announced that San Francisco was selected to host the competition. The excitement was fueled by the knowledge that at least part of the course would be visible from our vantage on Russian Hill. 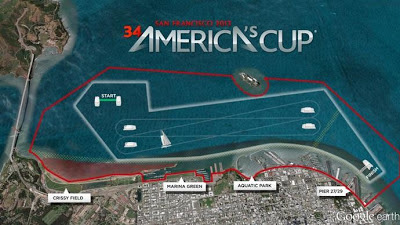 Over the years we've watched the teasers leading up to this event, including the 2003 Oracle Alinghi Moet Cup Challenge, and the more recent  World Series Regatta.  But today began the real deal.

The competition begins with the Louis Vuitton Cup - a  round robin tournament to determine which challenger will face current champion Larry Ellison's Team Oracle. The first scheduled race in the round robin today was between Emirates Team New Zealand and Italy's Luna Rossa. 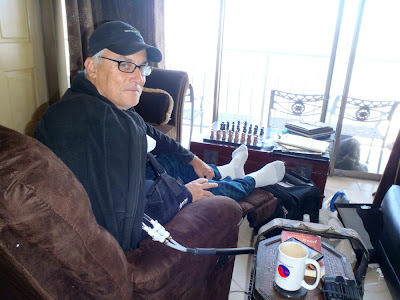 I was ready. Since I am recovering from a recent rotator cuff repair, there was nothing to do but settle into my new recliner, log into YouTube and Twitter coverage on my laptop, orient the recliner to the front window, keep the cold pack on the shoulder, have binoculars and camera standing by, fire up the time-lapse app on the Droid, sit back and enjoy.

Yes - you read that right - a recliner. Since I am in recovery mode Sigrid insisted I get a recliner while the arm is in a sling.  FTW! This is a piece of furniture that was considered an unacceptable mis-match to our decor for the last 20 years of our residence in the condo yet it is here now.  But I digress... 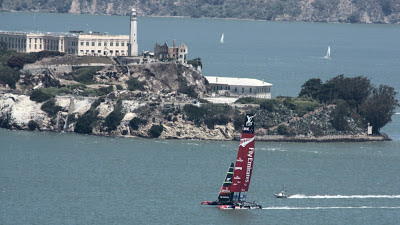 What a race! Emirates smoked Luna Rossa at the start, extended their lead around the first turn and into the downwind leg. By the time Emirates appeared on the portion of the course visible from my recliner, Luna Rossa was nowhere to be seen.  In fact, Luna Rossa was never seen by anyone at anytime during the race. Because Luna Rossa was pouting about a rule decision and decided to not race. Really:

"With a terse announcement posted on its website Saturday, Luna Rossa Challenge wrecked plans to unveil America's Cup racing Sunday on San Francisco Bay by saying it won't take part in the opening race. The Italian team said it would wait until an international jury decides its protest against safety measures introduced by regatta director Iain Murray. The jury is schedule to convene Monday. It is not known how long it will take to decide what has become an extremely thorny issue. Instead of a race Sunday, fans will see only Emirates Team New Zealand on the race course beginning at 12:15 p.m."

So all the Kiwis had to do was complete the course and not capsize the catamaran to win the first point of the tourney.  Whatev.  It was a chance to preview the races that will be taking place all summer leading into the big series for the Cup in the fall.  Some pics and video from the historic first "race" on the bay: 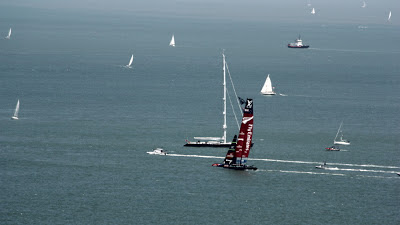 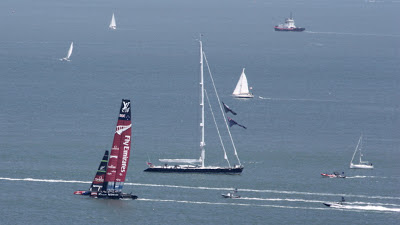 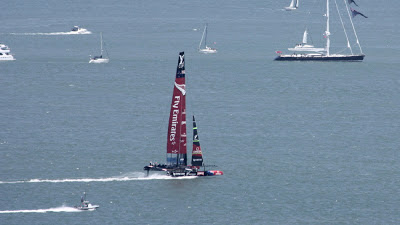 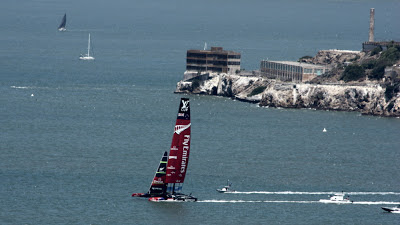 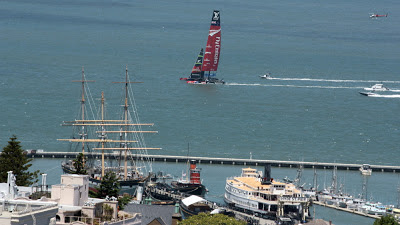 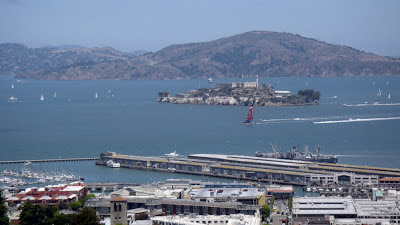 For more reportage on America's Cup Opening Day events, check out the on-the-ground-coverage by The Other Mike blogging at Civic Center:

"The first Louis Vuitton Cup race was set for today, between New Zealand and Italy, but the Italians have just announced they are boycotting today's race because of recent design change demands being made by Oracle USA, supposedly for "safety." An international sailing jury will announce a ruling on the issue Monday, at which point either litigation or racing or both will ensue. So far, this event has been eerily cursed and perfectly bizarre."

Awesome bird's eye coverage of a thrilling race. When will you be ambulatory again in case we are invited to a party on a Super Yacht?

Good stuff Mike, still hard for me to imagine the big, midwestern recliner in Sigrid's living room. Is that your casting shoulder?

Yes I am afraid that is my casting, golfing, and ab iron shoulder. I'll need to take this rehab oppty to become a lefty. Physically not politically. Although one cannot be sure how an injury will affect one's outlook.

We'll see the doc on a follow-up this week. Eager to move from "Keep it immobile" phase to physical therapy.

Although - given that the recliner will likely only last for as long as the injury, I am conflicted.

No report on another point for emirates team new Zealand today ? Seems this race was more exciting than usual.