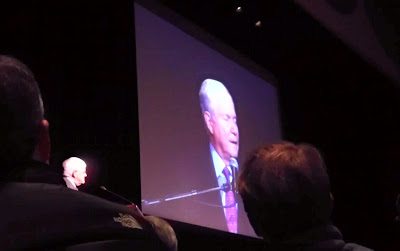 I had an opportunity to hear the former secretary of defense Robert Gates speak in Marin at the invitation of the MPSF Speaker Series. I've been to a few of these events over the last couple of years and always come away impressed (although some more than others).  Gates has an extraordinary history of public service, including leadership roles in the Air Force, CIA, and serving in the administration of seven presidents.He spoke for about an hour and then responded to questions gathered from the audience.

Some of his more interesting comments came during Q&A and I thought I'd share them here.  I do not have the benefit of a recording or transcript - so the comments I am attributing to Gates are from memory and paraphrased.  In no particular order a  few of his thoughts on our presidents, the presidency and challenges that face us:


Q: What represents the greater danger to the US - the deficit or terrorism?

Q: Are the enhanced interrogation techniques worth the increase in security?


Gates: No. It is understandable why we resorted to some of these techniques in the days immediately following 9/11. There were so many threats, nuclear, biological. chemical. We knew so little about the networks of  our enemies. Faced with these kinds of threats and not knowing much about the enemy, Presidents will make decisions that we all later regret. Lincoln suspended Habeas Corpus. Roosevelt interned Japanese Americans. The enhanced interrogations fall into this category. In past conflicts, as the threat subsided, these mistakes were reversed. We should do the same with the expanded definition of enhanced interrogations.  The Army Field Manual guidelines on interrogations should be sufficient as a general policy for interrogations across the board.


Gates: I found them both to be similarly decisive, which is somewhat surprising given their different backgrounds.  With George W. Bush serving both as a CEO in the private sector and as Governor of Texas, I would expect him to be accustomed to make decisions quickly. President Obama had no executive experience prior to becoming President yet is just as decisive.  They differ in how they arrive at decisions.  Both seek out and listen to the counsel of others, but I'd say President Bush was more of an instinctive decision maker who relied on his gut.  President Obama prefers to formulate an intellectual case, almost a legal argument, supporting his decision. They are similar in that once a decision is made, they do not look back and second guess themselves.

Q: Give us you snapshot impression of each of the Presidents you served?

Gates: Lyndon Johnson was a tragic figure.  He saw the presidency as a way to advance great causes like civil liberties and eradicating poverty. But Vietnam was his legacy and the downfall of his presidency.

Richard Nixon was a strange man and president. He was a strong leader, not ideologically driven and accomplished much as president. But he was overly motivated by petty jealousies and perceived slights.  His personal demons undermined his presidency and overshadowed his significant accomplishments.

Gerald Ford was a courageous and misunderstood president. The media focused on the clumsy caricature lampooned by Chevy Chase but he was probably our most athletic president until Barack Obama.  His decision to pardon President Nixon was courageous. He knew it would cost him politically, but believed it was the right thing to do for the country to put Watergate behind us. His decision spared the country years of divisive non-productive conflict.

In contrast to his campaign persona, Jimmy Carter was a cold administrator who did not inspire loyalty and consequently an ineffective president. He was too small for the role and that was reflected in his accomplishments.

Ronald Reagan was a visionary. He saw and pursued policy that was not considered possible my many professional pols within the Washington establishment. The ending of the cold war was inconceivable to most of us at the beginning of his administration.  Reagan was the catalyst and driving force that permitted it to happen

George Herbert Walker Bush was an unappreciated President who's stature will increase with the passage of time. There is no precedent in history for the collapse of an empire without catastrophic war.  President Bush was instrumental in managing that outcome during the collapse of the Soviet Union.

The presidency of George W. Bush will be always be tainted for initiating the Iraq War under false premises.  However, his decision to "surge" the military force in Iraq after the 2006 election was the most courageous decision I have seen from any President. Very few supported that decision, it was politically unpopular, but he was convinced it was the right decision. I feel history will show it was the right decision that permitted us to leave Iraq under better circumstances than if popular sentiment prevailed.

Most topical was his comment when asked about the nomination of Chuck Hagel to replace Leon Panetta as secretary of defense, who in turn, succeeded Gates in early 2011. I won't need to rely on memory for his thought. Hhe cited his recent press release endorsing Hagel for the role:


"I congratulate Senator Hagel on his nomination to be secretary of defense. I am grateful for his willingness to take on this responsibility at a time of great challenges for the Defense Department. While there are issues on which I have disagreed with him, such as the 2007 surge in Iraq, he is a man of complete integrity and deep patriotism. He is also the president's choice. The country and our men and women in uniform would be well-served by his swift confirmation."

With Colin Powell  and Bob Gates on the list of  Hagel supporters, the tally is now four of the last five Secretaries of Defense serving under two Republican and two Democratic presidents having endorsed him. In fact, every SecDef since Colin Powell filled that role for Bush41  has endorsed Hagel with the single exception of Donald Rumsfeld. Which, given my views on Donald Rumsfeld, is another plus.

As we look forward to the contentious Chuck Hagel nomination process, it is instructive This view of war and America's role in the world is entirely consistent with the perspective espoused by Robert Gates as he wrapped up his tenure as SecDef:


"...Mr. Gates was asked to confirm reports of policy duels during the two years before Mr. Bush and Vice President Dick Cheney left office, a time in which he was said to have been successful in altering policies or blocking missions that might have escalated into another conflict. “The only thing I guess I would say to that is: I hope I’ve prevented us from doing some dumb things over the past four and a half years — or maybe dumb is not the right word, but things that were not actually in our interest,” Mr. Gates said ... Some of the defense secretary’s confidants, however, confirmed that Mr. Gates prevented provocative, adventurist policies against Iran, in particular, that might have spun into war. “He’ll be remembered for making us aware of the danger of over-reliance on military intervention as an instrument of American foreign policy,” said former Senator David L. Boren

In our polarized partisan and divided country, it is easy to become cynical about those who accept the mantle of public service in our federal government.  The perception of our leaders is inevitably filtered through our own bias and/or the partisan preference of the media. Media pandering or demonizing reinforces preconceived notions that reduce leaders to cartoon caricatures.  By contrast, hearing them speak and answer questions for over an hour in a venue like the MPSF Speaker Series can leave you feeling you have a real sense of the person behind he persona. It could also be that you've been snowed by a skilled speaker, but you still feel that way.

Robert Gates left the stage in the Marin Conference Center to a standing ovation. I came away thinking of him as a true patriot who has worked tirelessly and selflessly on behalf of our country for over 40 years. It was a privilege to hear him speak.

Cross-posted and updated on The Dividist Papers.

NOTE: Just to be sure I am covering all my bases with a full disclosure:  I received a complimentary ticket to this event from a friend associated with the organization. No expectations or limitations regarding my blog or post were communicated or associated with the ticket. This was backposted to the date of the speech.
Posted by mw at 11:11 PM