The answer is "Both" 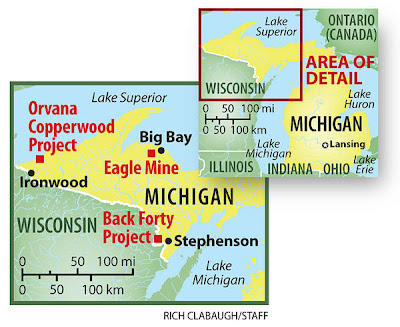 The Mining boom in the U.P. is getting national press. CSM story today:

Jeff TenEyck was glad to come home last year. He had left Michigan for a small trucking business in South Carolina but returned to work at a new mine just outside Big Bay, the little mill town where he grew up.

"This is the biggest shot in the arm for the economy here since Henry Ford was here," says Mr. TenEyck, whose grandfather worked in a lumber mill that Ford bought in 1943.

Driven by a worldwide surge in demand for metals, mining is on the rebound in Michigan's Upper Peninsula, bringing the hope of jobs to remote and economically depressed rural communities. A dozen miles south of Big Bay, London-based mining giant Rio Tinto PLC and its subsidiary, Kennecott Eagle Minerals Co., are digging a shaft beneath a pine-covered flat called the Yellow Dog Plains. They plan to begin extracting nickel and copper early next year. Rio Tinto says the Eagle Mine will be the largest nickel mine in the country and will create as many as 700 new jobs.

Meanwhile, Orvana Minerals Corp., a Canadian mining company based in Toronto, is close to final approval for a copper mine expected to create hundreds of jobs in the sparsely populated western Upper Peninsula. Next in line, Aquila Resources Inc. and HudBay Minerals Inc. plan to apply for a permit later this year to mine zinc, gold, and silver at a small, open-pit mine along the Menominee River called the Back Forty Project.

There could be more. Mining companies have been busy prospecting for new deposits, crisscrossing the Upper Peninsula by plane and helicopter, drilling exploratory holes, leasing land, and buying up mineral rights. They've revisited old mines to see if new technology might make it profitable to reopen them.

"It's like flies to honey," says Theodore Bornhorst, professor of economic and engineering geology at Michigan Technological University in Houghton. "It's got a lot of people interested."

Kind of a stupid headline. The answer is "Both". I just hope the Eagle Mine doesn't screw up the trout streams or the Coaster Salmon run on the Yellow Dog plain.

I have some hope that they'll tread lightly as they will also be mining under the exclusive and wealthy Huron Mountain Club. They have skin in the game and a historic stake in protecting the watershed and wilderness. It's big money vs. big money. Sometimes it works better that way.