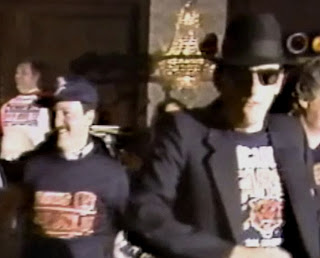 Chalk this up to an act of desperation. Da Bears have a big game against a resurgent Michael Vick and the Philadelphia Eagles in Philadelphia tonight. Despite putting their 4-3 record up against a losing 3-4 record for the Eagles, the Bears are big underdogs. No one expects them to win. This game will probably tell us whether the Bears are going to contend this year.

If I was to indulge in some wishful thinking - my hope is that the Bears go on from a win tonight to beat Minnesota and Detroit in the rematch, spoil Green Bay's perfect season in Green Bay on Christmas Day, make the playoffs as a wildcard, and in a rematch of last years NFC Championship, knock off the Packers in Green Bay in a blizzard to go to the Superbowl.

Yes this involves some some serious magical thinking, so I am invoking the magic of the 1985 Bears Superbowl Shuffle to help out.

Found this in the archives...

In 1986 I was working at enterprise software supplier McCormack & Dodge. One week before Superbowl XX, the annual M&D sales kickoff meeting was held at the company Headquarters in Natick, Massachusetts. The VP of Sales was based in Chicago and there was a lot of excitement and rivalry building for the Chicago Bears / New England Patriots match-up. It was a fun meeting but the most fun was the the sales team rendition of the Superbowl Shuffle. Greatest.Cover.Ever.

Despite the potential for personal embarrassment, I am willing to take the risk in the hope some of that old magic will rub off. Hey - it worked for the '85 Bears, which most knowledgeable football fans acknowledge to be the greatest team in NFL history. Maybe, just maybe, the magic will work again.

Look at that. It worked! Bears win 30-24. I'm back on the bandwagon. All it takes is a little 1985 Magic. I guess I am going to have to keep this up front and center for the rest of the season. Not that I am superstitious, its just that, you know, it worked.
Posted by mw at 1:12 PM