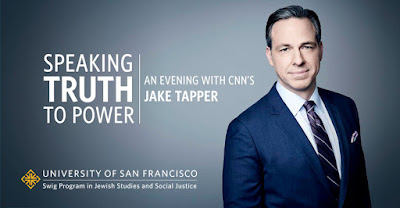 Jake Tapper was in San Francisco as a featured speaker in the USF Swig Program in Jewish Studies and Social Justice. His topic - "Speaking Truth to Power". I joined the 1,600 people attending the event at Temple Emanu-El.

I was as interested in the history of the venue as much as the event itself. The Emanu-El Reform Jewish congregation dates to 1850 when it's first synagogue was built on Sutter between Powell and Stockton. Later destroyed and repaired after the 1906 earthquake and fire, the congregation built and relocated to the current structure on Lake and Arguello, built almost 100 years ago. 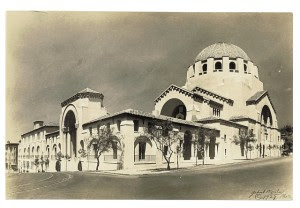 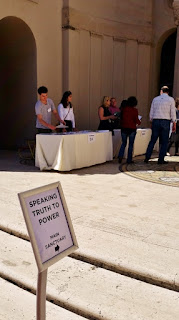 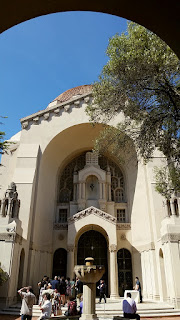 For some reason, I did not know that Jake Tapper was Jewish, although that probably should have been easy to guess (Jake / Jacob - duh). I also didn't know that his brother Professor Aaron Tapper was a local and an important figure in the San Francisco and Jewish community.

Aaron Hahn Tapper is the Director of the Swig Program in Jewish Studies and Social Justice at USF. Hotel magnate Melvin Swig funded and founded the program at USF in the late seventies, interestingly the first (and only?) Jewish Studies Program in a Jesuit University - ever.

We have a bit of a local connection to this program. Melvin Swig was our neighbor when we moved to the Summit Building in '92 (If you consider the 15th floor residents of a 32 story highrise to be neighbors with the Penthouse Olympians). Let's just say we just met in the elevator occasionally with occasional interactions in the Homeowner Association. He died a couple years after we moved into the building.

But I digress. Back to the Tapper speech. 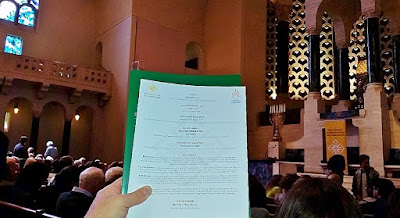 The program was kicked of by Rabbi Beth Singer, then Kent Swig, son of Melvin Swig invoked the legacy of his father, followed by Aaron Tapper, the Director and reinventor of the Swig Program introducing his brother Jake.

I won't need to summarize or encapsulate Jake's speech, as Rob Gloster of The Jewish News got it right..

Jake Tapper in S.F.: There are lies on both sides, time to ‘stand up for truth’ 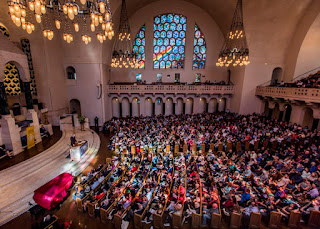 "Many of the 1,600 people who came to Congregation Emanu-El on April 22 to hear CNN’s chief Washington correspondent Jake Tapper talk about “Speaking Truth to Power” probably were expecting a full-throated condemnation of the Trump administration.

They indeed did hear plenty of criticism of President Donald Trump’s disregard for the truth, but what they really got was a denunciation of lies and unproven accusations from both sides of the U.S. political spectrum.

Tapper, the headliner at a program celebrating the 40th anniversary of the Swig Program in Jewish Studies and Social Justice at the University of San Francisco, spent most of his talk focusing on dishonesty from both left and right, as well as the difficulty journalists face in staying objective while calling out falsehoods..."

... Instead I'll excerpt recollections and share some impressions Gloster didn't include in his article. I wasn't taking notes and I don't have a recording, so these should be considered paraphrased as opposed to accurate quotations.

As Gloster reported, Tapper took a nuanced and balanced approach to the subject. He started by asking the question What truth? To what power? Who has the power? He then offered examples and counter examples of "speaking truth to power",  observing that if one is not uncomfortable asking or hearing the question, it's probably not "speaking truth to power".
Which is not to say that Tapper shied away from bashing President Trump and his administration. While he considers taking positions on policy to be outside of his role, he considers it a journalistic obligation to call out truth vs lies, and to not hesitate pointing out behavior that strain the bounds of decency. Again from the Gloster article:


“I try to make it clear that I don’t have an opinion professionally about immigration or tax policy or trade or North Korea,” he said. “Where I try to take a stand is just what’s true and what’s not true; those things are not subject to debate... It’s important to take a stand on things that there’s no debate on — facts, decency,” Tapper said. “I don’t think that’s partisan.”

To that point, he offered a "Greatest Hits" listing the three worst things Trump has said and done in the campaign and as President.
Tapper also acknowledged that "all politicians lie" but drew a distinction with the Trump administrations saying “The sheer number of falsehoods and lies coming from this White House is staggering,”

My favorite bit was when he humorously commented on becoming a meme, saying - "Hey I wasn't intending to become a meme... that's just my face."

If Jake Tapper ever looks at you the way he looks at Kellyanne Conway, just change whatever you are saying. pic.twitter.com/ciyqN2PaNG
— Jessica Huseman (@JessicaHuseman) February 7, 2017

It was an informative speech that offered insight into the man, his perspective on his profession and the bizarre times we find ourselves now.