Ten Years Ago - A Seat That Will Live In Infamy

Got bored with Monday Night Football, and stumbled on "Catching Hell" - an excellent ESPN documentary on the infamous Bartman Incident in game six of the 2003 National League Championship Game. Tweeting my appreciation for one of the best sports documentaries I've seen, I learned it was exactly ten years ago:


10 Years Later, Steve Bartman Remains A Tragedy
"For this second, for that moment captured in the screengrab, Steve Bartman thinks the Cubs can still win the World Series. He doesn't quite realize that his life has forever changed. And if I had to wager a guess, I bet, at that second he doesn't actually care. There are runners on first and third, but there's already one out. Ivan Rodriguez hits into double plays all the time. That was quite the little hullabaloo there, hoo boy, but come on, boys, let's get back to business. Just five outs to go. Just five little outs to go...
He's here for baseball. If the Cubs had acted like Steve Bartman, had they put it behind them and concentrated on the task at hand, they might have won that World Series. They should have followed Bartman's lead. Everyone should have.

But they didn't. The Cubs, clearly panicked, had a big meeting at the mound, allowing the crowd enough time to focus solely on Bartman and not on what they were there for in the first place. And Prior stayed in the game.

On a 1-2 pitch, Ivan Rodriguez smashes a hanging curveball into left field for a base hit. On the next pitch, skinny Miguel Cabrera hits an easy groundball to shortstop Alex Gonzalez, who, distracted by Dread, bobbles it. Everyone's safe. The bases are loaded. The die is cast. History is sweeping over. Everyone sees what's happening now. What is on the field is too gruesome to look at. So they look away. They look to Aisle 4, Row 8, Seat 113. They look for Bartman."

The weird thing was this - every Cub fan immediately knew it was over. Everyone at Wrigley. Everyone watching at home. I knew. There was no reason to think it was over. This was game six. Game seven would be played at home with our ace on the mound. But we all knew.

I wasn't blogging then. Instead I  sent out a broadcast e-mail to mostly amused friends and posted it on a board. Found the e-mail in the archives and will reprise it here.  I'll include the continuing thread, because after watching the "Catching Hell" documentary, I wanted to show that I didn't blame Bartman. Not even then.  I blamed Prior and Gonzales.  And Dusty for not pulling Prior.  I didn't blame Bartman.

But that doesn't change the fact that the moment Steve Bartman touched the ball, I knew.

Dusty is still my hero. At least he got them into contention. The real test for Dusty is next year, and whether he brings the Cubs back to the post-season, or (more likely) they revert to their historical mean and fall back to being a .500 team, like the 69, 84, 89, 98 Cubs did.

The real problem that game was the Gonzalez error on the easy ground ball. If it were not for all the media focus on Bartman (The Fan), the Gonzalez gaffe would be sitting on the same pedestal as Buckner ('86 Red Sox) and Durham ('84 Cubs).

Anyway - Bartman is a folk hero in Florida. Jeb Bush offered political asylum, and he is also being offered "lap dances for life" from Florida strip clubs.

Cubs are f*cking brutal. The least of their problems is the fan. It’s starting to look like Dusty can’t close a series.

Concerned Friends,
I have received several communications expressing concern about my health and mental well-being after the Cubs/Marlins game last night. Please do not worry. As a life-long Cub fan, I am emotionally well prepared to deal with this turn of events.

I will admit that I was overcome with a profound 1984esque dread before game time last night.

It was an accurate premonition.

Do not be concerned if you do not hear from me over the next 12 hours. I will be dealing with this by going into seclusion, beginning with the ALCS game, and continuing through the expected final humiliation in Wrigley Field this evening. During this time of introspection, I will not be e-mailing, text-messaging, or taking calls. I will simply watch the inevitable denouement of this tragedy play itself out, and accept whatever meaning can be derived from an empty bottle of scotch.

In preparation for the game, I will re-read The Last Pennant before Armageddon (excerpt below) by W.P. Kinsella. In this short story, the coach of the Chicago Cubs is haunted by a recurring prophetic dream that if the Cubs win the Pennant, it will trigger the end of the world.

For any real Cub fan, The End of World seems a reasonable price to pay for a Pennant. Everyone else should be grateful to the fan that knocked the ball away from Moises Alou. As a result, the Cubs will lose, and the world will go on, as Armageddon is postponed yet again.

I assume that Mark Prior was referring to the Kinsella Prophecy in his quote after the game: 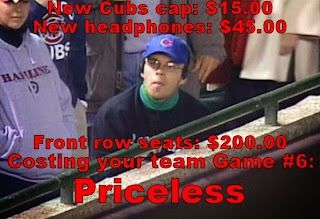 Excerpt from: The Last Pennant before Armageddon by W.P. Kinsella:

"The sun is finally shining on Al Tiller," read a recent headline in the Trib. For the moment he was the most famous baseball manager in the nation, the man guiding the Chicago Cubs toward their first pennant in half a century; everyone wanted to talk baseball, no one gave a damn about his dreams.  He could picture himself at a news conference, pausing right in the middle of fielding questions about his pitching rotation and his left fielder's Achilles tendon, to say, "Gentlemen for the past several weeks I have been having prophetic dreams. It is my considered opinion that if the the Chicago Cubs win the National league pennant, the world is going to end. " ... It was on the sixth night God spoke. Tiller was certain that Al Capone was one of lobbyists that evening. He had always thought of Capone as a White Sox fan... "I appreciate your interest," God said. "I want to assure you that I hold the Chicago Cubs in highest esteem. I have listened to your entreaties and considered the matter carefully from all angles. I am aware of how long it has been since the Cubs have won a pennant. I think you should know that when the Cubs next win the National League Championship, it will be the last pennant before Armageddon ...." Al Tiller assumed there was more, however that was the point at which he woke up, his sweat soaked pajamas wrapped around him like wet sheets, his heart thrumming. His last sight had been of the lobbyists leaping to their feet with joy as if their favorite player had just homered in a clutch situation."


That was probably as close as the Cubs got to the World Series in my lifetime. Well... except for 1989, when the Cubs came into Candlestick with 2-0 lead in the NLCS and I watched them get demolished  singlehandedly by Will Clark.  Or in 1969, when the Cubs had a ten game lead going into September and I cut high school to sit in the bleachers and watch them execute the second greatest swan dive in sporting history, eclipsed only recently by the Kiwi choke in the America's Cup last month.

I see we will soon have a new manager.

Deb and I were at your place with the kids being treated to giant Chicago Hot Dogs when this happened. I thought you were crazy when you immediately decided that all was lost!!

Speaking of "All was(is) Lost", please do not go see the new film staring Robert Redford that opens on the 18th. If you ignore this plea, then at least please do not take Sigrid!!

If you do see the film, you may never want to do another delivery on Morpheus...

I vividly remember the game, but forgot you guys were here for it!

No worries. I saw the trailer and will avoid it for the same reason I'll never watch "Open Water". If I ever saw the movie I'd probably never go scuba diving again.

What ever happened to Bartman? Has he been treated like the jerk he is for the rest of his life, or has there been some sort of redemption?

As for Dusty Baker, he's a good coach, but he ALWAYS sucks at the playoff level, and ALWAYS manages to screw it up. This is a truism known by any sentient being.

Bartman is the only one in Chicago to emerge with any sort of dignity out of that night. Despite several reporters diligent efforts, he has remained out of the public eye.

As near as I can tell from the occasional story (the documentary and stories linked in the post), he still lives in the Chicagoland area. Despite reportedly being offered hundred of thousands of dollars to cash in on his 15 minutes for advertising and stories, he has remained below the radar, never issuing any public statement since his apology to the city the next day.

I suspect that if the Cubs ever do make it to the World Series, there will be a major effort to have some sort of event where he is acknowledged and the City can purge itself of its collective guilt for the way he was treated. Much like Boston did for Bill Buckner.