As planned, we are awakened in the early morning dark. Our third and last desert camp is broken down and loaded by first light. Set up in the dark, broken down in the dark, too late we realize that between the exhaustion, rain and paranoia, no pictures were taken of the last camp. None.

During the night a Timbuktu mechanic and his repair truck found our camp in the dark. We marvel that he found us, but Bouj is dismissive when asked about this minor miracle. Paul translates his comments as "This is our superhighway. We just told him we were right off the main road." Interesting, as none of us can actually see a road of any kind. Pre-dawn, under overcast skies, when it is deemed just light enough to be safe to drive, we are rolling again. Kofi and the mechanic head back to retrieve to the abandoned Land Cruiser. The rest of us are driving to Timbuktu.

We are again riding four to a car. Mathew and Maria, Sigrid and me are

riding with John. Skies remain gray, and rain beads on the windshield. The rain is a blessing, as it is just enough moisture to hold down the dust, give the soft sand some adhesion and firm up the traction for the Land Cruisers. We make great time, with minimal delays for cruisers stuck in the sand. After a four hour desert drive, we pull in to Timbuktu on time at 10:00 sharp. Paul is pleased. 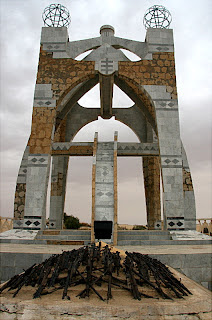 First stop is at the Peace Monument, commemorating the end of the Tuareg rebellion in 1996... 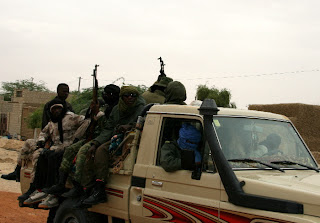 ... a fitting location to bid adieu to our Tuareg military entourage. 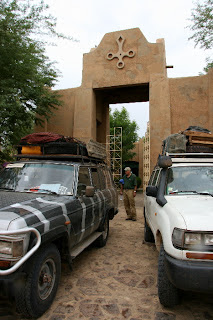 Then on to the Hotel Azalei, where we check in, unload the cruisers, shower, and rest before lunch. Sidu drives Maria and I to an internet cafe near the the post office.I am trying to connect with my brother Harlan and through him, his associates in Timbuktu. She gets through, but I use the secure encrypted web interface for my Network Solutions e-mail domain, am frustrated by the low bandwidth connection, and securely unable to get my mail. 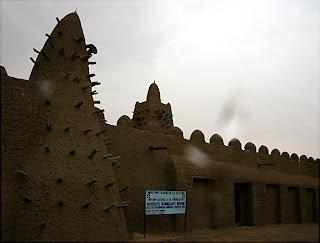 After lunch we hook up with a local guide and begin a walking tour of Timbuktu. We visit the Sankore Mosque under overcast skies and light sprinkling of rain. The tour is a bit disjointed, as it is taking place during the afternoon call for prayers on a Saturday when many public facilities are closed. After three trips to the "police station" we are able to secure the Timbuktu stamp for our 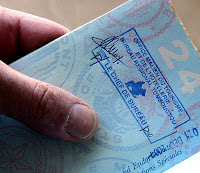 passports, a major group objective for the day. What else would you want on the last page of your passport? The post office is closed, so Sigrid and I volunteer to take the group postcards and get them mailed and postmarked in Timbuktu, as we will be staying a few days after the group leaves. 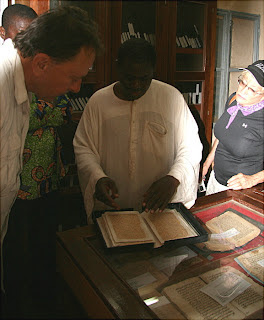 The manuscripts and private libraries in Timbuktu are of primary interest to the group, and after a wait for someone to open it, we are granted access and tour of one such library. At the time I thought this was the Mamma Hadeira Family library, but subsequently learned that it was not. Still not sure which library it was, but it was interesting nonetheless.

Mathew, Wes, Susan, Sigrid and I leave the tour and head back to meet the cars, only to find they are not where we expected them to be. We hang around an open market while waiting for the local guide to track down the land cruisers. Finally back at the hotel, I re-bandage Sigrid's toes, and we rest. Before dinner, Bouj takes us to a Tuareg home, where we drink strong sweet tea, and are entertained by traditional Tuareg dances.

The final group dinner includes warm toasts to Paul and crew, exchanges of e-mail, and free flowing wine and beer. I ask Paul The Question, strategically timed before tips are distributed. It is the same question I asked our guide at the conclusion of our last tour in Africa more than a dozen years before:

"So Paul, are we the best group you have ever had?"
Paul is too honest for his own good. After laughing and thinking a bit, he hems and haws about not being able to compare one group to another - an answer that can be distilled to a succinct - "No." Paul finally finds an answer that he can live with: "This group drank more than any of my other groups." I find that answer strangely satisfying.

After dinner we meet Mark in the bar, and have a last drink while we back up Sigrid's photo's on Mark's "Wolverine" hard disk drive. While the drive is churning, a road-ragged Kofi walks into the bar. He has returned from the Sahara sands with his rescued and repaired Land Cruiser. He is smiling, tired, and jazzed from the long drive as he sits at the bar. I buy him a large Kastel Beer. Wes hands him a cigarette and lights it for him.

Very informative post. There are different mosques in Mali. Djenneis very famous place in Mali. It is most visited place by the muslims. You can see the beautiful architecture in the mosque.The great mosque of djenne was built on an elevated platform of 62,500 square feet.