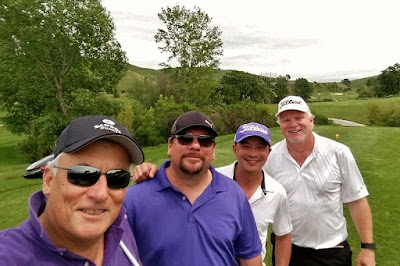 Beautiful day for an OGC event at Callippe Preserve Golf Course. Bob and I are paired with Mark and Jay. Everyone plays their own ball, but we play as a team in a "Two Net Best Ball" event. We started hot. Jay birdied and I parred the first hole. As a team we were 4 under after 1. We finished the day 17 under par, but 2 strokes behind the winners. My "others" on 9 and 18 didn't help.

Bob insisted on documenting my drive on this hole, where I failed to reach the red tees. 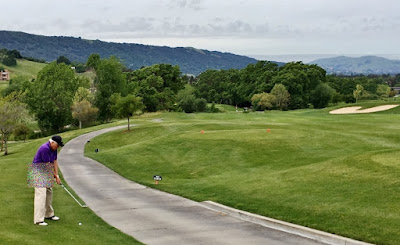 Fine. But I need to maintain my "G" rating on blogger so had to censor this image. BTW here is a shot of Bob hitting his second shot out of the rough... 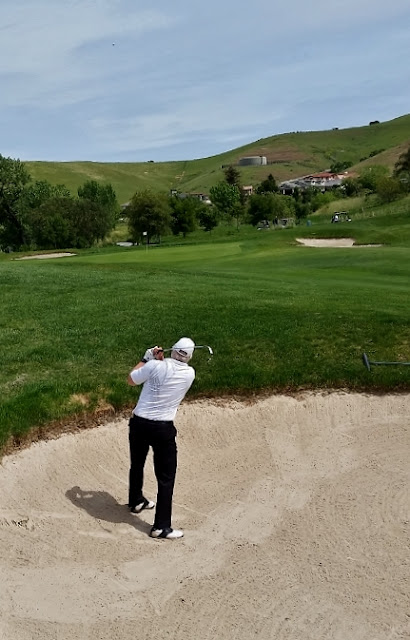 The highlight of the round was Mark's eagle on 14. I didn't get a pic of the approach, but bracketed the gem with his tee shots. I think this was his tee shot on 14:

He skulled his second shot 140 yards out, but it took a friendly bounce off  a green side hillock. Nobody else saw it, but Mark heard it hit the pin, disappear, and thought it might have gone in. He wisely sends Jay ahead for independent confirmation.

Jay finds it in the cup. Defying convention, Mark also hits a great tee shot on 15 after the eagle.

We were looking good on 18, heading for the clubhouse at 18 under, but the team folded like Van De Velde at the 1999 Open.

This was Bob and my scores from the carts electronic scorecard. If it wasn't obvious, I am Player 1. My only par was the first hole and... 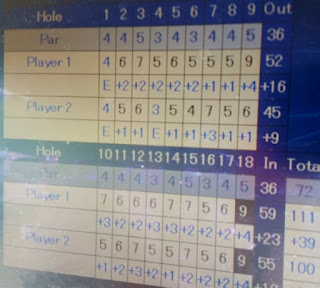